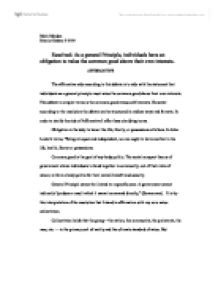 Resolved: As a general Principle, individuals have an obligation to value the common good above their own interests. Discuss.

Mark Mendez District Debate 3-9-04 Resolved: As a general Principle, individuals have an obligation to value the common good above their own interests. AFFIRMATIVE The affirmative side according to this debate is to side with the statement that individuals as a general principle must value the common good above their own interests. This debate in simpler terms is the common good versus self interests. However according to the resolution the debate can be structured in endless ways and formats. In order to clarify the side of Affirmative I offer these clarifying terms. Obligation is the duty to honor the life, liberty, or possessions of others. In John Locke's terms, "Being all equal and independent, no one ought to harm another in his life, health, liberty or possessions. Common good is the goal of any body politic. The social compact theory of government allows individuals to band together in community, out of their state of nature, to form a body politic for their overall benefit and security. General Principal cannot be limited to a specific case. A government cannot indirectly "produce a result which it cannot command directly," (Sonnerman). ...read more.

A persons life, health, liberty, and possessions are higher benefits than being able to have unregulated individualism. An individual's loss is just if the community benefits. My second contention is that unrestrained individualism hurts individualism. a. The ideas of individual choice and decision are noble at best. The thought that ever human should be able to do whatever they want whenever they want as long as they do not harm property, life, or liberty cannot hold true. For ever action there is an equal and opposite reaction. For example the CEO of a large business chooses to close down its factories in America and open up new sweat shops in middle-east countries. Not only does the CEO's self interest bring cruel working conditions to women and children but also it causes Individual Americans to be out of the job. Valuing self interests justifies this because the man now makes more money. b. Unrestrained self interests cannot be justified. "Society is joint action and cooperation in which each participant sees the other partner's success as a means for the attainment of his own," (Mises) Altruism as a general principle is no longer practiced. ...read more.

One cannot argue that the loss of slavery did not harm self interests. Racism and a poor economy in the south both arose from the civil war conclusion. Cost benefit analysis of this proves that the gain in freedom of an entire race and culture outweighed the loss in economic stability. b. It was for the common good that all rights are given to countries citizens. The common good instills the positive aspects of self interests such as one's freedom in equilibrium with utility. Valuing the common good maximizes the amount of people in the collective who have these freedoms. In conclusion I have proven that individuals must value the common good above their own self interests in order to preserve their way of live made by collective goods, help individualism by regulating some liberties, and to allow collectivism to balance with self interest. I state that a collective is a formation of a group of individuals with similar ideals and goals. Siding with the affirmative is the most logical by considering the examples given by Harvard professors, and enlightened philosophers. Cost benefit analysis of any situation shows that the common good must be valued above an individuals own interests. Again I must urge an affirmative ballot. ...read more.