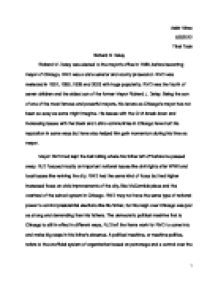 Richard Daley and other Mayors of Chicago.

Ashir Mirza 6/3/2012 Final Task Richard M Daley Richard M. Daley was elected to the mayor's office in 1989, before becoming mayor of Chicago, RMD was a state senator and county prosecutor. RMD was reelected in 1991, 1995, 1999 and 2003 with huge popularity. RMD was the fourth of seven children and the eldest son of the former Mayor Richard J. Daley. Being the son of one of the most famous and powerful mayors, his tenure as Chicago's mayor has not been so easy as some might imagine. His issues with the CHA break down and increasing issues with the black and Latino communities in Chicago have hurt his reputation in some ways but have also helped him gain momentum during his time as mayor. Mayor RMD had kept the ball rolling where his father left off before he passed away. RJD focused mostly on important national issues like civil rights after WWII and local issues like reviving the city. RMD had the same kind of focus but had higher increased focus on civic improvements of the city, like McCormick place and the overhaul of the school system in Chicago. RMD may not have the same type of national power to control presidential elections like his father, but his reign over Chicago was just as strong and demanding than his fathers. The democratic political machine that is Chicago is still in effect in different ways, RJD left the frame work for RMD to come into and make big steps in his father's absence. ...read more.

Twenty three percent of the students there were chronically truant."1 The percentage of students graduating high school is remarkably low and needed to get a positive boost. The takeover would help schools in these kind situations get better funding and more attention by the school board, to insure that the kids in NKO get the proper education and skills to go out and fight for jobs in a global economy. NKO and other areas in Chicago got the reboot order where the neighborhood would change by attracting middle and upper class families back in to the city limits by attracting them to better housing and better schools, Patillo states "The consolidation of power under Mayor Daley meant that the same city leadership that was transforming public housing and enabling the resurgence of home buying and building in NKO was also addressing the poorly performing schools. All three endeavors were in the service of making Chicago an attractive place to live and work, especially attractive to the middle class."2 The NKO project for schools was a dramatic change for the community since it would shut down operations of the old school system and reopen as new schools, "the closing of Shakespeare Elementary School, to be reopened as two separate schools- Ariel Community Academy and the North Kenwood/Oakland Charter school- and the closure of Martin Luther King Jr. ...read more.