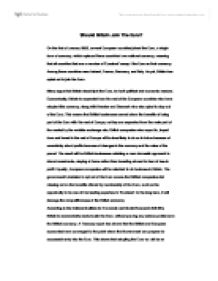 Should Britain Join The Euro?

Should Britain Join The Euro? On the first of January 2002, several European countries joined the Euro, a single form of currency, which replaced these countries' own national currency, meaning that all countries that are a member of 'Euroland' accept the Euro as their currency. Among these countries were Ireland, France, Germany, and Italy. As yet, Britain has opted not to join the Euro. Many argue that Britain should join the Euro, for both political and economic reasons. Economically, Britain is separated from the rest of the European countries who have adopted this currency, along with Sweden and Denmark who also opted to stay out of the Euro. This means that British businesses cannot share the benefits of being part of the Euro with the rest of Europe, as they are separated from the main part of the market by the variable exchange rate. British companies who export to, import from and invest in the rest of Europe will be less likely to do so in future because of uncertainty about profits because of changes in the currency and the value of the pound. The result will be British businesses retaining a more domestic approach to future investments, staying at home rather than investing abroad for fear of loss in profit. ...read more.

Instead of France and Germany joining forces together and keeping Britain at a distance, there would be different alliances among Britain, France and Germany on different subjects. The smaller European countries would also find it much easier to ally with the British if we were in the Euro. For example, for a long time the Dutch have wanted Britain to become more involved in Europe in order to avoid domination by France and Germany. If Britain joins the Euro, it means that its voice on economic issues, such as the reform of the European Central Bank, or the Common Agricultural Policy will be far more powerful than if Britain remains outside of the Euro. However, many people feel just as strongly against Britain joining the Euro. The main argument against joining the Euro is the cost. Converting the British currency from the Pound Sterling to the Euro would cost �36 billion, money that could be better spent on the country's schools and hospitals. All British businesses would be affected by the change in currency; the total savings on transaction costs for those businesses that trade with Euro member countries would amount to just 0.1% of the Gross Domestic Product. This would be dwarfed by the cost of conversion. Joining the Euro would also push the unemployment rate up again. ...read more.

Further proof of this comes from Professor Jurgen Donges, Head of German Economic Committee, who says: "Global investors are staying away because they don't believe the Europeans have the will to tackle badly needed reforms. The weak Euro is a message to each country that they must make fundamental reforms if Europe is to benefit from the New Economy. In France and Italy reform is barely discussed and I have the impression that in Italy reform has gone backwards". Britain would also lose out on its identity as a individual country, as Romano Prodi, President of the European Commission says: "The Euro can only lead to closer and closer integration of countries' economic policies... This demands that member states give up more sovereignty". In conclusion, the issue of Britain joining the Euro is still a much-debated one. Whether the Government chooses to join the Euro or not, the decision will affect the country's economy. Romano Prodi, President of the European Commission says of joining the Euro: "By definition it's a permanent decision. You cannot enter into monetary union thinking you can do so for five years or so." Britain's Government will have to think long and hard before coming to any decisions on the Euro, as it will affect our economy for now and for years to come. ...read more.