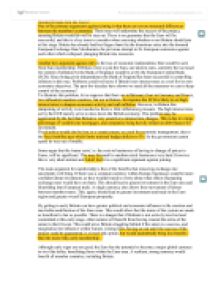 Should Britain Join the Euro

Should Britain Join the Euro? One of the primary arguments against joining is that there are severe structural differences between the members' economies. These may well undermine the success of the project, meaning Britain would do well to stay out. There is no guarantee that the Euro will be successful, and this is a key issue to consider when assessing whether or not Britain should join at this stage. Britain has already had her fingers burnt by the disastrous entry into the doomed European Exchange Rate Mechanism, the previous attempt to fix European currencies against each other which collapsed, plunging Britain into recession. Another key argument against entry is the loss of economic independence that would be seen from Euro membership. If Britain were to join the Euro, our interest rates, currently the tool used for control of inflation by the Bank of England, would be set by the European Central Bank (ECB). Since being given independence the Bank of England has been successful in controlling inflation in this way. Problems could well arise if Britain loses interest rates as a tool for its own economic objectives. The past few decades have shown we need all the measures we can to keep control of the economy! ...read more.

I believe this will be the case if Britain does not join the single currency, and feel the aforementioned evidence does not disprove this. I am sure that businesses wanting to trade within Europe will be more likely to locate on the continent if they don't have to worry about exchange rates. It is important to value and treasure our heritage, as that cannot be replaced. However, whether this should stand in the way of such a big issue I really doubt. I believe our culture to be strong enough to retain a real identity without the pound. Britain has many strengths, economically and culturally, that should enable her to grow and become more prosperous. But this would undoubtedly be made easier by membership in a successful Euro zone. However, whether or not this is attainable is really the issue - can the differences between the member's economies be overcome? Is convergence possible? Will the Euro be successful? I would tentatively suggest that the answer to these questions is, in the long term, yes. On this basis I suggest that it is best for Britain to join soon. There is a real risk of failure and there will undoubtedly be problems in the short to medium term, but I feel it is worth the risk. ...read more.

Disadvantages of European Monetary Union? v Too Many Rules and Regulations: There are a great deal of rules and regulation, some of which don't seem sensible. This can make the EU inefficient and excessively bureaucratic. (source:Economics) v Unaccountable to its Citizens Decisions are taken a long way from the people, making it a poor example of democracy. People who are affected by EU decisions have little chance to make their voices heard. v Concentration of Power: EU institutions have too much power. They have taken away the right of individual countries to make their own decisions about economic and political matters. (source:Tutor2u.net) v Speed of Integration: The EU is moving towards more and more integration at a phenomenal rate with not enough thought or debate on the issues. The UK risks being swept by this tide of integration without plotting and following its own course in the interest of its own citizens. v Loss of UK Sovereignty: Membership of the EU has led the UK to lose its sovereignty. As a result the UK is no longer free to develop its own policies, make its own laws, or control its own economy in response to its own needs. ...read more.

There are major problems here. The second set of answers don't address the question, so either the question has been typo'd or the answers are irrelevant. The first mini-essay is satisfactory, but lacks a clear argument expressed at the beginning and makes up for a slightly ropey grasp of the facts by using lots of emotive language.