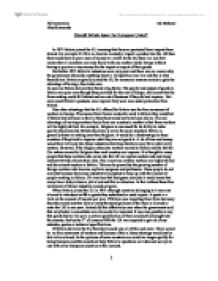 Should Britain leave the European Union?

Should Britain leave the European Union? In 1973 Britain joined the EU meaning that they are protected from imports from abroad. For example if a firm in America wanted to import a product into the UK then they would have to pay a sum of money or a tariff. In the EU there is a rule that means that all members can trade freely with one another inside Europe without having to pay tax or any money for the import or export of their goods. But before 1973 Britain's industries were very poor and there was no reason why the government should do anything about it. Competition was low and this is why they did not. Britain originally joined the EU for economic reasons mainly to gain the advantage of having a free trade area. As soon as Britain did join they faced a big threat. The quality and output of goods in Britain was poor even though they provided for the rest of Europe, this meant that the firms making could fall behind and run out of business if they did not improve. ...read more.

It is thought to many people that these workers who come into the UK are asylum seekers and cost many ordinary British citizens their jobs. This is not true as these workers are highly skilled and do not seek asylum in Britain. This can be proved by the growing number of foreign workers who become say brain surgeons and professors. These people do not cost jobs because they cause industry to be pushed to keep up with the amount of people working in Britain. If it was true that foreigners cost jobs it would mean that every time a baby is born a job is lost and this is ridiculous. In fact without these free movement of labour industries would not grow. When Britain joined the EU in 1973 although countries belonging to it were not allowed to introduce tariffs to goods they subsidised or used a quota. A quota is a limit on the amount of imports per year. If Britain was importing Beer from Germany then they could say that only so many thousand galleons of the Beer is allowed to enter the UK in one year. ...read more.

But seeing as this would happen if we were in the EU anyway there is really not much point. But recently many important figures around Europe including Tony Blair are discussing a new currency for most of Europe, the Euro. This is a disadvantage to everyone because it means for one thing that if there is a crash or recession then there is the possibility of everyone else falling into the same trap. But is does have the practical advantage of no exchange rates and easier finance. My opinion is that Britain should not leave the EU because they gain much more if they stay in it. If each country specialises in different industries then trades freely with one another they will all be more efficient. This is why France makes good wine Belgium chocolate, UK cars and so on. This is why it is important to stay in the EU, because we are relying on others and others are relying on us. Britain will gain nothing from leaving the EU except possibly escaping from the Euro which many people are against. AS Economics Ed Mathews Miss Simmonds 1 ...read more.