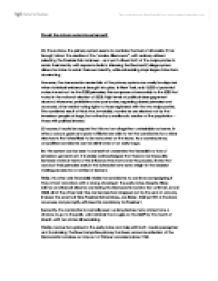 On the surface, the primary system seems to combine the best of all worlds. It has brought about the decline of the “smoke-filled-room”, with ordinary citizens selecting the Presidential nominees – and yet it allows both of the major parties to retain their identity with separate ballots. Mirroring the Electoral College system allows for states to retain their own identity, while scheduling stops larger states from dominating.

However, the democratic credentials of the primary system can easily be disputed when statistical evidence is brought into play. In New York, only 18.3% of potential voters turned-out for the 2008 primaries; this compares unfavourably to the 50% that voted in the national election of 200B. High levels of political disengagement abound. Moreover, prohibitive state-party rules, regarding closed primaries and caucuses, often restrict voting rights to those registered with the two major parties. The combined result of this is that, invariably, nominees are elected not by the American people at large, but rather by a smaller sub-section of the population – those with political interest.

Of course, it could be argued that this not an altogether undesirable outcome. In effect, caucus goers and party-affiliates are able to vet the candidates for a wider electorate that is less likely to be educated on the issues. As a consequence, unqualified candidates can be eliminated at an early stage.

But the system can be seen to somewhat undermine the federalist nature of American government. It is widely acknowledged that there is vast inequality between states in terms of the influence they have over the process. States that conduct their primaries early in the schedule have extra weight in the decision making process for a number of reasons.

Firstly, it is often only financially viable for candidates to continue campaigning if they attract donations with a strong-showing in the early states. Despite Hilary Clinton and Barack Obama contesting the Democratic nomination until mid June in 2008, all of the other main five contenders had dropped out by the end of January. Indeed, the eventual Vice Presidential nominee, Joe Biden, finished fifth in the Iowa caucuses and promptly withdrew his candidacy for President.

Secondly, the nomination is normally sewn up long before many states have a chance to go to the polls. John McCain had a grip on the GOP by the fourth of March, with ten states still remaining.

Thirdly, momentum gained in the early states can help with both media perception and fundraising: the New Hampshire primary has been accurate reflection of the Democratic nominee on nine out of thirteen occasions since 1960.

Since the running order for primaries remains pretty consistent from year-to-year, states like New Hampshire and Iowa are considered to play a disproportionately prominent role in Presidential politics. Combined, they have a population that is less than half of one percent of the population of the United States, and yet they wield enormous power. Some even speculate that those early contests can distort the wider legislative process: excessive subsidies for the ethanol-fuels are widely credited to Congressmen’s motivations to appease voters in Iowa. In 2008, scheduling became particularly controversial with Michigan and Florida trying to move their primaries to earlier in the season. The Democratic party initially responded by refusing to seat their delegates at the national convention – although they later agreed to seat half of them.

In some respects this discontinuity can be seen as a good thing: states with comparatively small populations are given a chance to have an impact; if all the primaries were held at the same time, states like Iowa would become irrelevant, when contrasted with states like California, New York and Texas, which seat far more delegates. This seems a little disingenuous, though, given that other small states, like South Dakota, are rendered insignificant by their late primaries.

In practical terms, the primary season can be seen as being too long. Given that campaigns are usually launched around a year before the Iowa caucus, in reality electing a President takes almost two years of relentless politicking. Given that the mid-terms occur shortly before candidates start forming exploratory committees, it can start to feel like there is no time to actually govern; one election cycle leads into another, and media coverage focuses on the campaign trail rather than the business of legislating. The drawn out process can also corrupt the nature of the campaign. Debate over the same tired issues quickly becomes too dull to fill column inches and the public debate shifts to matters of personality. Similarly, parties that are ideologically united can be split apart by a bitter contest between two or more strong candidates – to date, there are still many in feminist factions of the Democratic party who are unwilling to switch their allegiance from Clinton to Obama.

A long selection process is not without its merits, of course. Arguably, the strain of two years of speech-making and begging for money prepares potential Presidents well. Clinton’s gaffes late in the Primary season – such as her inexplicable, false claims that she landed in Bosnia under sniper fire – were widely put down to fatigue. The argument goes that since Presidents will inevitably come under stress, it’s best to see how they cope at press conferences before we see how they cope as commander in chief of the most powerful military on the planet. Moreover, long campaigns can raise the level of public awareness. Few Americans take an active interest in what happens in D.C. on a daily basis, but lengthy election cycles bring D.C. to the people. It promotes civic responsibility.

Perhaps the more credible defence of the primary system pertains to so-called “retail politics”. States with diminutive populations inevitably have campaigns more personal campaigns – the candidates are physically expected to meet a far higher proportion of voters in order to garner support. Not only does this allow for a great level of public scrutiny, but it also allows relative unknowns to emerge. For a low-key politician, running a national, fifty-state campaign from scratch is rarely realistic. The state of Iowa, however, with its measly population of three hundred thousand represents a more achievable target. And with a victory comes all the electoral benefits referred to above. Thus, Clinton had a huge nationwide lead in the polls in early 2008, but Obama’s unexpected victory in Iowa propelled him towards the nomination.

This tendency to bemoan the impact of money on the primaries is also perhaps a little naive. From the point of view of the parties, the ability to raise money is a vital attribute. Obama’s online donations strategy was honed in the primary season (during which he outraised Clinton and the other Democrats by a substantial margin) but put him in a strong financial position once. It seems a little flawed to condemn the primary system for being driven by money: it is part of a wider electoral landscape in which adverts have to be paid for and staff need to be hired. While politicians like Mitt Romney may gain an advantage from their personal wealth this is true of aspiring representatives at any level. One use of funds that is unique to the primaries, however, is the transfer of funds to superdelegates: donations from Clinton and Obama to undecided Democratic power-brokers was seen as effectively buying votes.

This is a question that depends entirely on what one wants to achieve through the primary process. Is it strenuous enough to test a potential nominee’s ability to run in a national campaign? Certainly. Does it ensure that potential Presidents are personable and can connect with voters individually? Well, yes.  But to the degree that electoral systems should be designed to advance the cause of democracy, the current primary system does not fulfil its purpose. It does not give every citizen an equal voice – indeed, it gives some no voice at all – and it arbitrarily places large amounts of power in the hands of small states (and, potentially, superdelegates).

It is also riddled with the flaws of the Electoral College voting system. Winner-takes-all contests in the Republican primaries can provide candidates massive steps-forward in the delegate-maths for miniscule victories. By contrast, the Democratic Party antidote, proportional allocation of the delegates, can lead virtual ties in close states.

However, there is no obvious way to create a more democratic system that doesn’t further shift the emphasis to larger states or break down the independence of individual states. A national primary-day, twice the size of Super Tuesday would be chaos, and would remove the gritty campaigning – probably producing mediocre candidates.  There is a line to be drawn between the raw extent of democracy and the quality of it. There is almost an inverse correlation between the two.