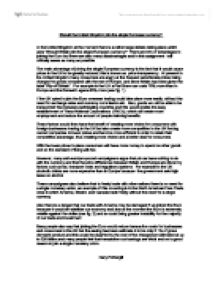 Should the United Kingdom join the single European currency?

Should the United Kingdom join the single European currency? In the United Kingdom at the moment there is a rather large debate taking place which asks "Should Britain join the single European currency? There are lot's of advantages to joining the Euro but there are also many disadvantages and in this assignment I will critically asses as many as possible. The main advantage of joining the single European currency is the fact that it would cause prices in the UK to be greatly reduced, this is known as price transparency. At present in the United Kingdom many consumers are angry at the frequent extortionate prices being charged for goods compared with the rest of Europe, and since Britain has been given the label "Rip-off Britain". For example in the UK a Fiat Bravo car costs 76% more than in Europe and the Renault Laguna 60% more (see fig. 1). If the UK opted to join the Euro overseas trading could take place more easily, without the need for exchange rates and currency commission etc. Also, goods would be able to be transported free between participating countries and this would enable the easy establishment of Trans National Corporations (TNC's), which will create more employment and reduce the amount of people claiming benefits. These factors would then have the benefit of creating more choice for consumers with foreign businesses trading in the UK but also create more competition in the UK forcing current companies ...read more.

When the UK joined the ERM in the early 1990's, it soon became necessary to raise interest rates to keep within the tunnel. This had the effect of prolonging the recession in the UK and in September 1992 the UK decided to suspend their membership along with Italy. As a result of the ERM 100,000 businesses were bankrupted and unemployment rocketed and stood at 9.6% and many people are fearful that this will happen again if we join the Euro. There is an advantage to the fixed exchange rates however because they are an effective anchor against inflation as the UK and Italy have realised. From the ERM the Maastrict Treaty was set up in 1991, which set out to strengthen the European Community and provide movement towards economic and monetary union by setting timetables for the introduction of the single European currency. If Britain was to opt to join the single European currency they would have to meet several convergence criteria set out in the Maastrict Treaty, this is because for a single currency to work all of the economies involved must be reasonably close economically. The five criteria are as follows: * Inflation - no more than 1.5% above the average inflation rate of the lowest 3 inflation countries in the EU * Interest rates - the long term rate should be no more than 2% above the average of the three countries with the lowest inflation rates * Budget deficit ...read more.

This would then have the disadvantage however of causing some unemployment in the bureau de change industry. In conclusion I feel that on balance the UK should not adopt the single European currency at the moment mostly because of the cost of the changeover, estimated at �30 billion, not to mention the cost of reducing the public spending budget in order to meet the convergence criteria set out in the Maastrict Treaty. This money could be better spent on priorities such as the NHS and the transport system, which are in crisis at the moment. In my opinion Britain should sit on the fence and wait to see if the single European currency does work in the long term before committing. Simply by looking into the media it can be said that the Euro has not met it's first hurdles and is failing in many aspects including being very weak against the pound (see fig. 4). At the moment there is a great deal of variation between the economic cycles of the European countries involved and the process of reaching similar cycles would be very long and arduous and would probably involve high prices, high taxes and increased unemployment until these problems are rectified. If Britain were to wait until all of the problems of the Euro have been ironed out we would be in a better position to make a decision on whether or not to join the single European currency. ...read more.