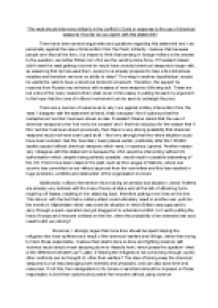 Should the West intervene militarily in Syria?

﻿?The west should intervene militarily in the conflict in Syria in response to the use of chemical weapons? How far do you agree with this statement? There have been several arguments and questions regarding this statement and I am personally against the idea of intervention from the West, militarily. I believe that because people are killed all the time, it is insane to think that sending in foreign military is the answer to the question, as neither Britain nor USA are the world?s police force. If President Assad didn't want the west getting involved he would have avoided chemical weapons to begin with, so assuming that he has used them, surely he is already prepared to take a few tomahawk missiles and therefore we have no ability to deter? Throwing in another hypothetical, maybe he wants the west to have a direct but limited involvement. Therefore, the support he receives from Russia may enhance with masses of new weaponry following suit. These are but a few of the many reasons that I shall cover in this essay in putting forward my argument in the hope that the cons of military involvement can be seen to outweigh the pros. ...read more.

Is it worth putting the lives of troops and innocent civilians on the line, when the probability of an extended war as a result is still very strong? Moreover, I strongly argue that more time should be spent helping the refugees who have suffered as a result of the chemical warfare and killings, rather than trying to harm those responsible. I believe that what?s done is done and fighting violence with violence would simply mean stooping down to Assad?s level, which poses the question ?what is the difference between us?? Lastly, if helping the refugees is not convincing enough, surely other methods can be thought of, other than warfare? The idea of taking away the chemical weapons is a lot less damaging both mentally and physically, and can also save time and resources. If not this, then designated no fly-zones or sanctions should be imposed on those responsible, to limit their options and protect the innocent without using violence. Despite me bring strongly against the idea of military intervention from the west; it would be unfair to completely rule out the arguments in favour of this idea. ...read more.

As well as this reason, it is argued that it is immoral to sit back and do nothing whilst genocide continues, but considering we would be fighting genocide with murder, the idea of it being immoral sounds hypocritical. In conclusion, the idea of taking military action against Syria is unappealing, destructive and immoral. Attacking the country is not worth the risk and there is a very high chance of innocents being killed, troops dying and a new war starting. A non-violent form of help is the best method, preferably taking away the chemical weapons completely and punishing Syria by imposing sanctions, no-fly zones and jail sentences. I have argued strongly about the fact that intervention would result in murder, and I stick by this, but I do not believe that those who have committed such deeds should go unpunished. The major culprits should be punished aptly, but the whole country does not have to suffer; the troops don?t have to go on another mission that could last longer than expected. Getting more people involved will only worsen things, it is, in my opinion, best to avoid violence and send a message out to all other countries by non-aggressively punishing Assad and those responsible. ...read more.