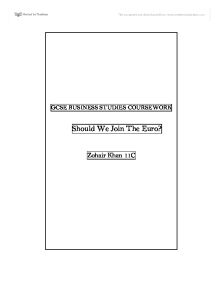 Should We Join the Euro?

GCSE BUSINESS STUDIES COURSEWORK Should We Join The Euro? Zohair Khan 11C Introduction: I am carrying out this piece of coursework to do some research on the European Union. Here's a little bit about the history of the European Union: 1946- The European Federalists Union is set into place in Paris, France. 1948- The custom convention between Belgium, Luxembourg and the Netherlands enters into force. 1949- The Western Union Treaty (Brussels Treaty) is signed by Belgium, France, Luxembourg, the Netherlands and the United Kingdom. 1949- France, Great Britain and the Benelux countries decide to set into place a Council of Europe and ask Denmark, Ireland, Italy Norway and Switzerland to help them prepare the statute of such Council. ...read more.

The answers were not even close but then again how will these ordinary people know anything about the EU. The most successful question, which was answered, was when was the EU formed. The correct answer was 1946 and everyone got this answer right. Conclusion: I think we should join the EU because there would be more advantages then disadvantages and more of the people in the United Kingdom would be happy. It's only some political parties of the government, which are against the idea of the EU in the United Kingdom because they need to save their reputation and try and win the majority of the votes to take power in the United Kingdom and they also want to save the Pound. By Zohair Khan 11C ...read more.