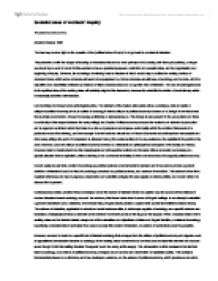 Socialist uses of workers' inquiry Translated by Arianna Bove Raniero Panzieri, 1965 The best way to shed light on the question of the 'political aims of inquiry' is to go back to a debate in Marxism. This presents us with the danger of focusing on theoretical issues and even perhaps of not dealing with them productively, a danger we should try to avoid in order for this seminar to have a practical purpose: a definition of a questionnaire, and the organisation and beginning of inquiry. However, the advantage of referring back to Marxism is that it would help us outline the working method of Quaderni Rossi, which some comrades still seem to be perplexed by. Some comrades are still wary of sociology and its tools, which is unjustified and essentially motivated by residues of false consciousness and a dogmatic view of Marxism. The use of sociological tools for the political aims of the working class will certainly reignite this discussion, because the scientific foundation of revolutionary action is historically identified with Marxism. Let me briefly run through some philological points. The Marxism of the mature Marx starts off as a sociology: what is Capital: a critique of political economy, if not an outline of sociology? Marx's critique of political economy is based on a charge of one-sidedness that is amply documented - though not always sufficiently or persuasively so. This charge is also present in the young Marx and there is continuity in this respect between the early writings and Capital. Political economy reduces the worker to an element of production and is regarded as limited rather than false in so far as it purports to encompass social reality within the confined framework of a particular mode of functioning, and then accepts it as the best and natural one. In Marx's Economic and philosophical manuscripts and other early writings the point of comparison is alienated being ('the worker suffers in his very existence, the capitalist in the profit on his dead mammon.) ...read more.

The dogma of destructive creation fails as a silver lining to the cloud of warfare. Destructive acts entail real costs that diminish available opportunities. The idea that we need to find work for idle hands in capitalism at best leads to a kind of Sisyphus economy where unproductive industries garner subsidies from productive people. At worst, it serves as a supporting argument for war. The more recent versions of the false charges against capitalism do nothing to invalidate two simple facts. Capitalism generates prosperity by creating new products. War inflicts poverty by destroying existing wealth. There is no sound reason to think otherwise. D.10 How does capitalism affect technology? Technology has an obvious effect on individual freedom, in some ways increasing it, in others restricting it. However, since capitalism is a social system based on inequalities of power, it is a truism that technology will reflect those inequalities, as it does not develop in a social vacuum. No technology evolves and spreads unless there are people who benefit from it and have sufficient means to disseminate it. In a capitalist society, technologies useful to the rich and powerful are generally the ones that spread. This can be seen from capitalist industry, where technology has been implemented specifically to deskill the worker, so replacing the skilled, valued craftperson with the easily trained (and eliminated!) "mass worker." By making trying to make any individual worker dispensable, the capitalist hopes to deprive workers of a means of controlling the relation between their effort on the job and the pay they receive. In Proudhon's words, the "machine, or the workshop, after having degraded the labourer by giving him a master, completes his degeneracy by reducing him from the rank of artisan to that of common workman." [System of Economical Contradictions, p. 202] So, unsurprisingly, technology within a hierarchical society will tend to re-enforce hierarchy and domination. Managers/capitalists will select technology that will protect and extend their power (and profits), not weaken it. ...read more.

As the quote suggests: statistics about the development of wages and strikes, or expressions of conflict, may reflect the crisis of the movement but they don't explain it and neither do they help us do anything about it. We hope the inquiry will help us understand the background of the crisis and also find out where a new movement begins: in the real conditions of exploitation. These are not reduced to 'the workplace' but include the general organisation of society: from the 'rearing' and reproduction of labour power in households, through their '(de)formation' in schools and universities, their squeezing in various workplaces, to their 'correction' in juvenile detention centres and prisons. We are interested in the process of production as a place where exploited people from all over the world come together and have to get along - whether they want to or not. Where they are opposed to capital or the state not just as victims or petitioners but where they produce the wealth of this society and thereby materially change it. That is why our attention goes to the back-breaking harvest on strawberry fields, to the metal workshops, to the transport of goods and to the call centre 'service hell'. We ask ourselves how the coercion of work changes and under what conditions we have to sell our labour power. How are we actually being put to work within the combination of machinery, the division of work, and the hierarchy that goes with it? The organisation of exploitation mirrors the current power relations, and new struggles and their possible self-organisation will be based on it. It is not just that someone else draws profit from our work but also that our entire life is determined by this exploitative relationship. It subjects our rhythm of life to shift plans, adapts our movements to the requirement of machines and changes our social relationships. In the inquiry into call centres we have emphasised everyday working life. The following section is based on our own experiences and on interviews with other workers.[62] ...read more.