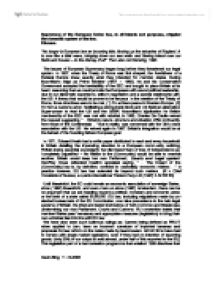 Supremacy of the European Union has, to all intents and purposes, crippled the domestic system of the law. Discuss

Supremacy of the European Union has, to all intents and purposes, crippled the domestic system of the law. Discuss. "No longer is European law an incoming tide, flowing up the estuaries of England. It is now like a tidal wave, bringing down our sea walls and flowing inland over our fields and houses - to the dismay of all" The Late Lord Denning, 1990. The issues of European Supremacy began long before they threatened our legal system. In 1957, when the Treaty of Rome was first shaped, the forefathers of a Federal Europe knew exactly what they intended for member states. During Macmillan's reign as Prime Minister (1957 - 1963), he and his Conservative Government accepted the inevitability of the EEC and sought to place Britain at its heart, reasoning that we could provide the Europeans with sound political leadership, due to our diplomatic experience, skills in negotiation and a special relationship with the US. A theory that would be proven to be tenuous. In the creation of the Treaty of Rome, three directives were to be met, (1) To achieve peace in Western Europe (2) To form a customs union, facilitating a strong trade block and (3) Build an alternative Super-power to rival the US and the USSR. Macmillan's application for British membership of the EEC was met with rebuttal, in 1963, Charles De Gaulle vetoed the request suggesting, " .. ...read more.

It will eradicate Trial by Jury, introduce Double Jeopardy, allow Imprisonment WITHOUT charge and replace the Innocent until proven Guilty concept with Guilty until proven Innocent. Indeed, since Amsterdam, we are now facing the very real comprehension of what being part of the EU has in store for us. New policy areas include, Employment, Equal Opportunities, Research and Development, Public Health, Social Policy and Transport. We are now signed up to a European Union that has a Parliament, a Flag and an Anthem, a Union that wants a single Currency, Army and Foreign Policy. So what of the UK? One could argue that Britain has kept its sovereignty with the fact that it could pass an Act to " .. renounce the Treaty - or would that be an illegal act of rebellion?.. " (Norman Tebbit Nov. 1998) We have already seen that Britain's entry into the European Treaty's has invoked huge reform. (British) Parliament must now legislate in conjunction with EU law, Acts and Laws already in existence must be interpreted to conform to EU Law and the State has to ensure that all EU law is transposed and implemented accurately. This puts a huge strain on the Courts whilst ruling, thus making a mockery of Precedent as any case incorporating EU legislation can only be considered using the purposive approach, in order that EU directive can be met. ...read more.

It would also seem that, with the continuing developments of the EU, the acceptance of the Treaty of Nice 2001 and the inauguration of a possible 12 extra States, that the need for further legislation will be necessary. Legislation upon legislation, and all needing to be interpreted, implemented and ruled upon in unison with what (Europe) intends. I think instead of using the term 'crippling', I would sooner consider Europe's invasion of Britain's Law methodology as 'modernising'. Perhaps the UK's methods of case law, derived from religion and precedent are antediluvian and ineffectual and certainly with the proposal of a Human Rights Bill, could be seen to detract from what the impending Act could offer. But, there must surely come a time when there is so much Law, when we are so encompassed by Rules and Regulations, that any Human Rights Act would be immaterial. Indeed, as we are slowly, but surely forced to become Europeans, The will, and Law of Europe seems destined to overthrow Britain's domestic system of the Law entirely, compelling us to adopt a Monist approach as apposed to Dualist. In conclusion, there is an alternative, and I would leave you pondering the words of (perhaps) the enlightened Lord Gardiner LC, who conveyed his view thus: "Under the British constitutional doctrine of Parliamentary sovereignty, no Parliament can preclude its successors from changing the Law . . . There is in theory no constitutional means available to us to make it certain that no future Parliament would enact legislation in conflict with Community Law." (Words - 1475) Gavin Bing 11-10-2002 ...read more.