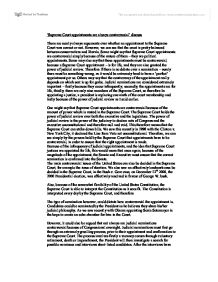 bush. Also, because of the somewhat flexibility of the United States Constitution, the Supreme Court is able to interpret the Constitution as it sees fit. The Constitution is interpreted every day by the Supreme Court, and therefore The type of nomination however, could dictate how controversial the appointment is. Candidates could be nominated by the President as he believes they share his/her judicial philosophy. As we saw recently with Obama appointing Sonia Sotomayor in the hope to create an echo chamber for him in the Court. However, it could also be argued that not always are judicial nominations controversial because of Congressional oversight. Judicial nominations must first go through an extremely gruelling process, prior to their appointment and confirmation to the Supreme Court. The process involves firstly a vacancy occurs through voluntary retirement, death or impeachment, the President will then investigate a search for possible nominees and interviews short-listed candidates. After the interviews have taken place, the president will announce his nominee. ...read more.

statement, this is because I really believe that it depends on the seat that is being filled, and how it affects the balance of the court - as we saw with Sotomayor, this was an extremely un controversial appointment, as she did not overly affect the balance of the court. Also, largely controversial appointments do not get through to confirmation process, and as we saw with Harriet Miers, if the nomination is not up to the job - they will not get a confirmation by the Senate. However, appointments are still hugely political, and a President will look to nominate a candidate who shares a similar political ideology - regardless of their qualifications in some cases. However, I still believe that in general, there must be some degree of controversy in the nomination process, as this will ensure that the correct person is nominated and then confirmed, simply because of the magnitude and scope of the position, the powers it holds and the ways it can affect the people of the United States. ...read more.