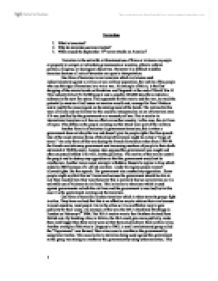 Terrorism. What is terrorism? 2. Why do terrorists use terror tactics? 3. What caused the September 11th terror attacks on America?

Terrorism 1. What is terrorism? 2. Why do terrorists use terror tactics? 3. What caused the September 11th terror attacks on America? Terrorism is the unlawful or threatened use of force or violence on people or property to compel or intimidate governments or societies, often to achieve political, religious, or ideological objectives. However it is difficult to define terrorism because all acts of terrorism are open to interpretation. One form of terrorism is war terrorism which is violence used indiscriminately against a civilian or non military population, the motive of the people who use this type of terrorism is to win a war. An example of this is, is the first dropping of the atomic bomb on Hiroshima and Nagasaki at the end of World War II. This instantly killed 70-10,000 people and a possible 200,000 dead from radiation sickness in the next five years. The arguments for this was to end the war, to avoid the potentially massive allied losses an invasion would cost, revenge for Pearl Harbour and to justify the money spent on the development of the bomb. The victims for this were civilians and not military so this could be interpreted as an act of terrorism even if it was justified by the government as a necessity of war. This is similar to international terrorism as it has an effect on another country, in this case, the civilians of Japan. This differs as the people carrying out the attack were part of the military. Another form is of terrorism is government terrorism; this is when a government does not obey the law and doesn't give its people rights like free speech. One of the most extreme forms of this kind of terrorism might be called a "reign of terror." An early form of this was during the French Revolution when from 1793-94 the French revolutionary government sent increasing numbers of people to their death estimated at 30,000 people. ...read more.

One example of their bombings is the Dockland Bombings in London in 1996. They continued bombing and killing innocent civilians to achieve the political goal of a united Ireland. Doing this could make a government give in to demands and stop the bombings. Other attacks have these similarities such as recent bomb attacks in the Middle East like the Hamas' suicide bombings against Israel. These are similar to the IRA bombing but also different because the people from Hamas are willing to give up their live for their cause by blowing them selves up. There have also been car bomb attacks in Iraq against the US to try and make more difficult for the US to operate. These attacks are similar to the Hamas attacks but have larger blasts. Terrorism can be used as one tactic in a larger war. Terrorism in war is normally the killing of civilians (non military) such as the Atomic Bomb drop on Japanese cities at the end of WWII. The bomb killed over 200,000 civilians, the reason for this was to end the war as Japan wasn't going to surrender and thousands of allied lives would be lost if an invasion of Japan were to take place. However, calling this terrorism is debatable as every other terrorist attack and in war; the US would say that they had good reasons for dropping the bomb but nonetheless this was an attack on civilians. There have been other attacks similar to this such as the British bombing of German cities during WWII which flattened cities and killed thousands. The aim was to destabilise the country, make them give in and to end the war in Europe and revenge for the bombing of the UK. The difference was that the bombs were different as nuclear bombs kill more people and are more destructive. Some might say that even recent events such the US bombing Iraq during the Iraq war could be seen as terrorism as it killed many civilians. ...read more.

After this, 4 wars were fought, in 1948, 1956 and 1967 which saw Israel fight of its attackers. Another war was fought in 1973 which ended in a cease fire. The reason this would make some Muslims hate America is that it was America that supported the creation of Israel and supplied weapons to Israel which led to defeats in wars. Another large factor was America's "violent" past 50 years. In 1953, America overthrew Prime Minister Mossadeq of Iran and installed Shah as dictator. The US gave military, political and economic support to Israel. In the 1980s, the CIA gave $3 billion to the Mujahideen to fight off the Russians. The US gave Iraq and Iran money to fight each other. In 1990, Iraq invaded Kuwait using weapons from the US, the US then invaded Iraq. As a result of the UN's severe sanctions on Iraq, 500,000 children died. These are reasons why some Muslims hate America. It is important to know that America might have a good reason to do these things, the information portrayed might be biased but this is how some Muslims see America as. The aims of Al-Qaeda are to unite all Muslims, overthrow all pro western Muslim governments and remove state boundaries between Muslim countries and to create a Islamic Caliphate. The reasons for hatred towards the Americans is because it is seen as the biggest obstacle to achieve these aims, it is seen as the "infidel" as it is not a Muslim country, it is seen as providing support to other "infidel" governments and it is seen as trying to take over the Middle East. It also opposes the US because it has arrested member of its organization. This is why the some Muslims hate the US, reasons such as the creation of Israel thanks to US support, the effect America might have on traditional Arab culture and US interest in the Middle East for its oil supplies. This led to attacks such as the 9/11. ?? ?? ?? ?? 1 ...read more.