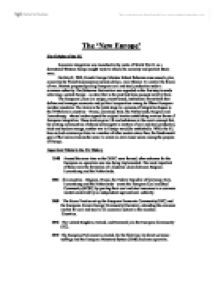 The 'New Europe' The Origins of the EU Economic integration was launched in the wake of World War II, as a devastated Western Europe sought ways to rebuild its economy and prevent future wars. On May 9, 1950, French Foreign Minister Robert Schuman announced a plan, conceived by French businessman-turned-advisor, Jean Monnet. To control the forces of war, Monnet proposed pooling European coal and steel production under a common authority. The Schuman Declaration was regarded as the first step towards achieving a united Europe - an ideal that in the past had been pursued only by force. The European Union is a unique, treaty-based, institutional framework that defines and manages economic and political cooperation among its fifteen European member countries. The Union is the latest stage in a process of integration begun in the 1950s by six countries - France, Germany, Italy, the Netherlands, Belgium and Luxembourg - whose leaders signed the original treaties establishing various forms of European integration. These treaties gave life and substance to the novel concept that, by creating communities of shared sovereignty in matters of coal and steel production, trade and nuclear energy, another war in Europe would be unthinkable. While the EU has evolved common policies in a number of other sectors since then, the fundamental goal of the Union remains the same: to create an ever closer union among the peoples of Europe. ...read more.

Further enlargement of the EU occurred in 1995 with the association of the Austria, Finland and Sweden. On January 1 1999, in a blaze of publicity and celebration, the Euro was launched with eleven of the fifteen members of the EU joining the single currency area. European Integration has not been without its problems and challenges in the 1990s nor has it been solely a Western European phenomenon. The early years of the 1990s saw the Exchange Rate Mechanism (ERM) of the European Monetary Systems (EMS) run into difficulties in a period of currency instability in 1992/3. Major devaluations of sterling, the lira, the French Franc, the Irish punt, the Spanish peseta and the Portuguese escudo contributed to the collapse of the EMS. The dramatic events in Central and eastern European countries (CEEC) in the late 1980s ushered in an era in which the EU could ignore developments in its own backyard. With the collapse of the Council for Mutual Economic Assistance (Comecon), CEEC began to look for new markets in Western Europe. From an initial fear of cheap CEEC imports the RU has done much to help these countries in their transition to the market economy and to aid their integration with the EU. ...read more.

The EU is spending almost $9 billion over five years to help prepare nine CEECs to prepare for EU membership. Since their independence in 1989, the EU has concluded trade and cooperation accords with most CEECs and has been at the forefront of the international effort to assist them in the process of economic and political reform. * The EU is also strengthening its links with the Mediterranean countries, which will receive some $6 billion in EU assistance over the next five years. * The EU maintains special trade and aid relationships with many developing countries. Under the Cotonou (formerly Lom�) Convention, virtually all products originating from 77 ACP (African, Caribbean and Pacific) countries enjoy tariff-free access to the EU single market, as well as a stable export earnings program (STABEX) and considerable financial aid. * The EU is the largest donor of the humanitarian aid to the victims of the conflict in former Yugoslavia and has played an active role in the mediation effort. * Through trade, the economies of the individual members are increasingly dependent upon each other. * The EU had a 40 percent share of world exports in1997; it nearest rival, the North Free Trade Area consisting of the USA, Canada and Mexico had 17 per cent. Economic Integration Economic integration refers to the merging together of national economies and the blurring of the boundaries that separate economic activity in one nation state from another. ...read more.