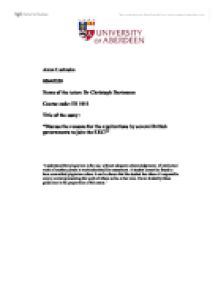 The aim of this essay is to present the reason of British government changing it's mind about EEC membership. The United Kingdom became a member of the European Economic Community in January 1973

Anna Luzinska 05645250 Name of the tutor: Dr Christoph Dartmann Course code: H1 1011 Title of the essay: "Discuss the reasons for the applications by several British governments to join the EEC?" 'I understand that plagiarism is the use, without adequate acknowledgement, of intellectual work of another person in work submitted for assessment. A student cannot be found to have committed plagiarism where it can be shown that the student has taken all responsible care to avoid representing the work of others as his or her own. I have abided by these guidelines in the preparation of this essay.' "Discus reasons for the application by several British governments to join EEC" Introduction: The aim of this essay is to present the reason of British government changing it's mind about EEC membership. The United Kingdom became a member of the European Economic Community in January 1973. However, its relationship with the European Community (EC) has been marked by strong national preferences and prolonged periods of weighing pros and cons of membership. At the end of the Second World War, Europe was totally drained and exhausted. Age-old trade links had been cut off and any heavy industry or vital manufacturing that had not been destroyed was operating below capacity in a Europe that lay bruised and ill-prepared to deal with the millions of people made homeless both during and after the war. The continent was now relegated to playing a supporting role on the international stage owing to the increased might of the United States and the Soviet Union and the growing rivalry between those two countries. ...read more.

As the Commonwealth expand in number with decolonization, it had become clearer that Britain , while still dominating trade with most of its ex-colonies, could not retain the same exclusive treading advantages as before. 4 By the late 1960s, links between Great Britain and the Commonwealth had been considerably weakened. During the period of world-wide trade expansion British exports to Commonwealth countries sank from �1.26 billion to �1.19 billion, and the share of Commonwealth exports fell from 47 to well under 40 per cent in terms of overall British exports. During the same period British exports to the EEC rose from �468 million to �762 millions. British exports to western Europe where already higher then exports to Commonwealth countries.5 A further motive which pushed the Conservatives towards considering EEC membership was worry about Britain's economic performance. In the 1950s the Western European economics had experienced a sustained period of economic growth. Though the British economy did grow in the 1950s, with a performance superior to the interwar years, it persistently lagged behind that of its major competitors. But the progress of EEC countries was very impressive . By contrast , Britain was at the foot of growth league table. Entry to the EEC was seen as a way of changing the economic agenda. It would be the industrial competition from within the EEC that would reduce problems such as overmanning and low productivity. The final factor was the development of EEC it self. ...read more.

The UK finally joined the EC on January 1, 1973.15 Third application Rresignation of De Gaulle in 1969, for reasons of home affairs, opened up a possibility of British accession. Immediately upon de Gaulle's resignation from French presidency in 1969, the Action Committee, which by then included members from all political parties, launched a new campaign for British entry. Any reconsideration of Britain's application had to await to the summit meeting at The Hague. Negotiations did not begun until mid-1970, with Britain being represented by a new Conservative government, victors in the 1970 elections. The main phase of negotiations took one year to complete. The situation changed with the shift of government in France and British accession negotiations emerged successful. 16 The most hotly debated issues were the United Kingdom's financial contribution to Community resources and its participation in the common agricultural policy (CAP). These problems, which were closely linked, were never properly clarified. As a result, the Thatcher Government would return to them in the late 1980s. By contrast, a definitive solution was found for the other stumbling blocks, namely West Indian sugar and New Zealand butter. During the summer of 1971, Edward Heath's Government pursued an intensive propaganda campaign in Britain in favor of accession to the common market. On 7 July 1971, the Government published The United Kingdom and the European Communities, a White Paper which reviewed the advantages of British accession to the EEC on a point-by-point basis. On 22 January 1972, in Brussels, Great Britain signed the Treaty of Accession. Following ratification by the respective parliaments, Great Britain, together with Ireland and Denmark, joined the European Community on 1 January 1973. ...read more.