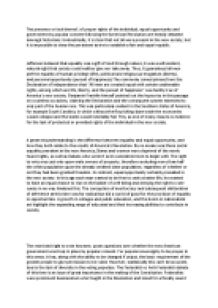 The American Revolution saw the birth of a nation dedicated to equality in opportunity, government by popular consent and individual rights. How true is this?

﻿The presence or lack thereof, of proper rights of the individual, equal opportunity and government by popular consent following the American Revolution are heavily debated amongst historians. Undoubtedly, it is clear that not all were present in the new society, but it is impossible to deny the persistent strive to establish a fair and equal republic. Jefferson believed that equality was a gift of God through nature; it was a self-evident, natural right that society could neither give nor take away. Thus, it guaranteed all men perfect equality of human privilege (life), political and religious prerogatives (liberty), and personal opportunity (pursuit of happiness).The commonly coined phrase from the Declaration of Independence that ?All men are created equal with certain unalienable rights, among which are life, liberty, and the pursuit of happiness? was hardly true of America?s new society. ...read more.

The right to vote was cast only upon male owners of property, therefore excluding more than half the white population upon the already omitted slave population; regardless of whether or not they had been granted freedom. In contrast, equal opportunity certainly prevailed in the new society. In this age each man wanted to be free to seek a better life, he wanted to have an equal chance to rise on the ladder of well-being and denying the right to vote surely in no way hindered this. The conception of meritocracy and subsequent obliteration of deference at this time was far radical but did a world of good for the provision of equality in opportunities. A growth in colleges and public education, and the boom in nationalistic art highlight the expanding range of educated and their increasing abilities to contribute in society. ...read more.

These opposing views, along with economic difficulties made it hard to create a fair government, but the Founders nonetheless established written constitutions, founded on ?the consent of the governed?, and containing various institutional checks on the power of government designed to prevent it from being abused. Eventually, Americans as a whole seemed convinced that their diverse views were fairly represented in government and that their rights were adequately protected, as George Washington?s first administration and the statesmen of the First Congress strengthened popular acceptance of the new Constitution. The Revolution brought about many social changes for America, and for the first time in the history of the world established a government founded on recognition of inherent natural and unalienable rights of the individual. They brought about a most radical awareness of equal opportunity among all and instituted a government ?deriving its powers from the consent of the governed.? ...read more.