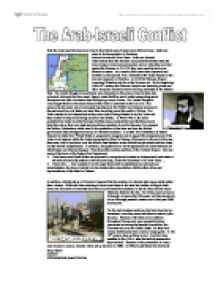 Both the Arabs and the Jews have lived in this fertile area of Israel since Biblical times. Both also claim to be descendants of Abraham; Jews are descended from Isaac. Arabs are Ishmael. After biblical time the Romans conquered the Middle East, the Jews living in Israel were persecuted, and so when they revolted against the Romans in AD 135 they were expelled and never allowed to return. As a result of this Jews were dispersed and resettled in Europe and Asia. Meanwhile the Arabs stayed in this area and renamed in Palestine. In 1516 the Ottoman Empire conquered Palestine and drove the Romans out. By the beginning of the 19th century the Ottoman Empire was becoming weak and other European countries were becoming interested in the Middle East. The United Kingdom in particular were interested in this piece of land as they had colonised India and the Suez canal, Egypt, meant that this would make transporting goods like spices and silks a lot easier than having to go round Africa. The United Kingdom even bought shares in the canal because they were so interested in the use of it. The reason why the canal was of such great importance to the British was because journeys to the east would be a lot faster and safer than travelling round the south of Africa. The Arabs wanted to be independent as they were sick of being dictated to by the Turks and they looked for help from strong countries like Britain. In World War 1, the allies protected the Arabs from the Germans but they also promised the Jews that they would help them set up their own state and give them protection from the Germans. For example the Balfour Declaration which was for the protection of the Jews and how the British government acknowledged the set up of a Jewish homeland. In a letter from McMahon to Sherif Hussein he stated how "Great Britain is prepared to recognise and to support the independence of the Arabs in all regions within the limits demanded by Sherif of Mecca. ...read more.

After the Yom Kippur War the Sinai Peninsula was given back which did ease some of the tension between the two. UN in 1967 decided to pass Resolution 242 that later became the basis of the Palestinian demands in the future. I. Withdrawal of Israel from the occupied territories. II. Acknowledgement of the sovereignty and territorial integrity and political independence of every state in the Middle East. III. A just settlement to the refugee problem. However, Israel did not comply with this, which did create some problems, and tension between Israel and the other Arab countries involved. Another big factor in this conflict is terrorism this will also be one of the reasons why peace will be difficult. A recent attack on a school in Lebanon is an example of the awful terrorism that goes on between the two (see newspaper article 2). In the attack, one child was critically wounded and other had minor injuries. The Hizbullah guerrillas are threatening to retaliate for the shelling of the school in Arab Salim. This complicates issues between the two as it also involves another country, Lebanon, another Arab country for Israel to compete with yet another Arab country complicating the argument further. Nevertheless, incidents like these between the two will certainly not help the peace progress as it causes even more hostility between the two. Terrorist attacks have been happening since as early as 1956. For example in the 1950's the Fedayeen was set up, many were young boys, they launched attacks on Israeli settlements killing mere civilians. In 1968 the PLO were able to resist the Israelis at Karameh resulting in the loss of tanks, planes and lives gaining back some of their confidence and the gain of some valuable weapons that they could using the future against Israel. In 1982 under the operation Galilee the Israelis invaded Lebanon where the PLO headquarters were, the Lebanese government were fearful of another attack so they expelled the PLO from there country. ...read more.

But I think that it is good that they are moving towards peace. I think that it will be easier for the Israelis to returns to its old borders but when it come to the Palestinians returning the situation will deteriorate again. With the interference of terrorist groups like the Hamas and the Hizbullah, the fighting will continue as the Palestinians return as the Israelis will loose land so that the Palestinians can resettle there. As there is so much antagonism between the two because of wars and terrorism so, I cannot see them living together in the near future peacefully. I think that the problem is that the leaders of the countries are pushing for peace because of the cost of war and it has been dragging on for a long time but have they considered what it will be like when the Palestinian return. Where are they going to live? What are they going to do for a living? In addition, will the country yet again be split; will a wall be put down the middle like in Germany? I think that these sorts of problems will take a lot longer to solve, as it is a very difficult and uncomfortable situation to tackle. I think that there will always be a slight conflict between the two even if it is just verbal as there is a lot of resentment and it will take them along time to forget the past. Before the invasion of the Romans they must have lived in peace, so maybe it is suggestible that they will be able to eventually live together as one again. I don't think that there is a peaceful solution to the Arab-Israeli conflict, they will always be bitterness between the two, I am pleased with the very recent peace movements and I hope that one day they will live together again like they did 2000 years ago. However, with terrorist attacks happening nearly every week they may not live together in amity for another 2000 years. Jenny Harris 01/05/07 GCSE/hist/Arab Israeli Conflict ...read more.