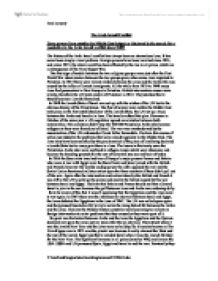 The Arab-Israeli Conflict - Have powers from outside the Middle East helped or hindered in the search for a resolution to the Arab-Israeli conflict since 1948?

The Arab-Israeli Conflict Have powers from outside the Middle East helped or hindered in the search for a resolution to the Arab-Israeli conflict since 1948? The history of the Arab-Israeli conflict has always been an international one. It has never been simply a local problem. Foreign powers have been involved since 1914, and, since 1973, the whole world has been affected by the rise in oil prices, which are a consequence of the Yom Kippur War. The first sign of trouble between the two religious groups came just after the First World War when tension between the two groups grew when some Jews migrated to Palestine. In 1921 there were violent clashes between the Jews and the Arabs this was caused by the influx of Jewish immigrants. All the while from 1933 to 1948 many Jews fled persecution in Nazi Europe to Palestine. British intervention causes more revolts; therefore the UN took control of Palestine in 1947. They decided that it should become a Jewish Homeland. In 1948 the Jewish State of Israel was set-up with the wishes of the UN but to the obvious dismay of the Palestinians. The first of several wars within the Middle East took place in the first established year of the Jewish State, the UN set up a truce between the Arabs and Israelis in June. ...read more.

From 1973 onwards the Middle East was becoming uncontrollable as terrorism and wars were becoming routine. The US National Security Advisor to President Nixon Henry Kissinger aimed to bring peace to the turbulent Middle East. In the December of 1973 he arranged ceasefires and began peace talks at Geneva. In the January of 1974 the Jews and Egyptians agreed to withdraw troops from and surrounding the Suez Canal, Israel also agreed with Syria to separate the forces on the Golan Heights. The UN drafted in troops to supervise the area. This time the USA was the main force trying to solve the crisis in the Middle East I believe that this intervention was needed because Israel was expanding and surpassing the limit of land requested by the UN but Israel weren't content with what they had got had been allocated. The expansion of Israel caused major problems because the Arab states surrounding the area were suffering. The USA were again involved but this time President Carter was aiming sympathy towards the Palestinian Refugees in 1977 the Egyptian Prime Minister Sadat had decided to make peace with Israel and met their Government this was a pivotal moment as he was the first Arab leader to visit Israel. A year later peace talks took place at Camp David in the USA, between Sadat and Begin they signed the Camp David Accords. ...read more.

However I believe they acted irresponsibly because these wars could have been prevented with the selling of artillery to Israel and the Arab countries. Then the weapons that fought the wars wouldn't have existed. So considering all of the information above the intervention of foreign powers hindered the search for peace within the Middle East. Many may argue the fact that they stopped many of the wars but the factor that crushes these arguments is the selling of artillery to these countries. This gave them the equipment to fight with where as before they may have only protested but not violently. The morals of the foreign powers have been damaged because they caused the wars (Britain separating the land) but the actions for wealth were inexplicable. They did help to end wars such as the Yom Kippur war; this was a pivotal war because it made the whole world take notice of the trouble in the Middle East. However many countries didn't intervene this is were Britain, France, USA and the USSR stepped in to stop the wars. I think that was a brave decision and they had seen that intervention was needed. Even though they had supplied artillery I believe they were strong enough to resolve the situation with passing the two resolutions 242 and 338 that the Middle East is still working towards today. Toni Lowery W:\GCSE HISTORY\COURSEWORK-ARAB-ISRAELI CONFLICT.doc ...read more.