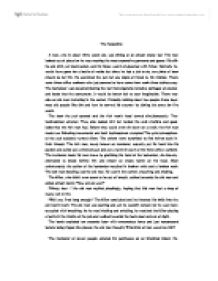 The Assassins A man, who is about thirty years old, was sitting at an almost empty bar. The man looked out of place for he was wearing the most expensive garments and gears. His silk tie and shirt, jet black jacket

The Assassins A man, who is about thirty years old, was sitting at an almost empty bar. The man looked out of place for he was wearing the most expensive garments and gears. His silk tie and shirt, jet black jacket, and his Rolex watch all gleamed with riches. Normally he would have gone for a bottle of vodka but since he had a job to do, two pints of beer should do for him. He examined the pub for any signs of threat to his mission. There were three office workers-who just seemed to have come from work-three tables away. The bartender was decontaminating the bar from cigarette remains, spillages of alcohol and foods that the consumers...it would be better left to your imagination. There was also an old man muttering in the corner. Probably talking about how people these days treat old people like dirt and how he served his country by joining the army for five years. The door the pub opened and the rich man's head turned simultaneously. Two businessmen entered. They also looked rich but lacked the cold charisma and good looks that the rich man had. Before they could even sit down on a chair, the rich man made two flickering movements and both businessmen crumpled. The quiet atmosphere of the pub suddenly turned silent. The others were surprised to find knives stuck in their throats. The rich man, newly known as murderer, casually put his hand into his pocket and pulled out a silencer gun and put a bullet in each of the three office workers. The murderer made his next move by grabbing the hand of the bartender, who bravely attempted to sneak behind him and smash an empty bottle on his head. ...read more.

As he had some expertise on Japanese weapons, he thought it was safe to bet his sexual organ that it was a throwing star. Archilles ducked and ran. Now he was able to smell some gas, fire. This time he jumped and landed on the wall of the corridor on his right. Next second, he repeated the process of jumping, except to the wall on the other side. He 'ran' along the wall, away from the floor where flame was being fired at. He did this until he reached the flamethrower, protruding from the ceiling. He kicked off from the wall on his left, kicked off the wall on his right, twisted his upper body to face the flame thrower and hurled his right foot at the flame vomiting machine. As his foot connected with the fire breathing monster, the metal creased and crumpled, was disabled. He landed on one of his foot and started sprinting. He spotted the throwing star that was thrown at him. He picked it up and pocketed it. As he got out of the corridor, he saw a camera on his right. Then he realised that it wasn't time to run away. It was payback time. At the top of this mansion, Jane Dorothy-the head of the communication department and an expert killer-was enjoying the tormenting of the so called 'the bet killer in the world'. It was things like this that humoured her. If there weren't any entertainment like this, she might have killed herself, for there was nothing more exciting than the pursuit of men, trying to save themselves from death closing in on them. She monitored Archilles every move. He was quite athletic and good looking but she wasn't paid to have a date with him. ...read more.

He never learned to disable a bomb before, on the contrary he learned to fix bombs so that he could reuse bombs that he used before. He had five seconds left, four, three, two... The time was up and the bomb exploded. Archilles woke up five minutes later. He also found the prime minister stirring in the living room. For the readers' benefit, the story of how they came to live would be explained. Archilles is a very gifted killer but he couldn't use any technology. He couldn't send an e-mail to his clients. Therefore he wasn't expected to disable any bomb. What he did to save his and the prime minister's skin was throwing the bomb as hard as he was able to, out of the window. The neighbour's house was destroyed and the shockwave from the bomb stunned Archilles but that was enough to save their skins. It also turned out that the president of the USA was hiding in the neighbour's destroyed house and watched Archilles and the prime minister panicking. It was just the president's luck that Archilles decide to throw a bomb there. Archilles and the prime minister decided that it would be dangerous for anyone to work as a killer. Therefore Archilles was now fired rehired as the commander of the UK army. He still had licence to kill because he was in the army but he was only to kill people in war so that was good. He now only had to work for an hour, unless there is a war, so he had more time to watch TV in his penthouse. Archilles learned that life is a very valuable thing now that he was living a proper life. Therefore he told the soldiers in the army never to kill any civilians, even in war. If they were to break that rule, they were to be punished by death. ...read more.