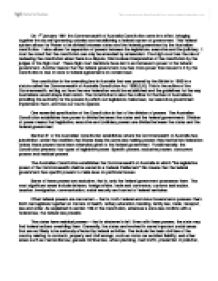 The Australian Constitution is the ultimate law ruling in Australia

On 1st January 1901 the Commonwealth of Australia Constitution came into effect, bringing together the six self-governing colonies and establishing a federal system of government. This federal system allows for Power to be divided between states and the federal government by the Australian constitution. It also allows for separation of powers between the legislature, executive and the judiciary. It must be noted that the constitution can only be amended by referendum. The High court has the role of reviewing the constitution when there is a dispute; this involves interpretation of the constitution by the judges of the high court. These high court decisions have led to an increase in power to the federal government. Another reason that the federal government now has more power than issued to it by the constitution is due of state to federal agreements on certain laws. The constitution is the overruling law in Australia that was passed by the British in 1900 in a statute called the Commonwealth of Australia Constitution Act 1900 (UK). This is the outline of the Commonwealth; setting out how the new federation would be established and the guidelines for the way Australians would shape their nation. The Constitution is also the outline for the lives of Australians, providing the authority for the powers by which our legislators make laws, our executive government implements them, and how our courts operate. ...read more.

formalized the position of the Loan Council * Social Services (28 September 1946) gave the Commonwealth power to provide certain social services * Aborigines (27 May 1967) gave the Commonwealth power to make laws for Aboriginal people resident in the States and to include all Aboriginal people in the national census * Casual Vacancies (21 May 1977) aimed at ensuring that a replacement Senator should be from the same party as the departing Senator * Territory Votes (21 May 1977) gave residents of the Australian Capital Territory and the Northern Territory the right to vote in constitutional referendums * Retirement of Judges (21 May 1977) provided for a retirement age for all federal judges. http://www.aph.gov.au/library/elect/referend/rintrod.htm One way of understanding why this is so, is by considering two viewpoints made by two highly knowledgeable and exceedingly recognized people in the area of Australian law. The Honorable Anthony Murray Gleeson, AC currently Chief Justice of the High Court of Australia in Canberra said "...The reason why only 8 out of 42 referenda have been accepted is that the public, (or more accurately a sufficient number of the public to block the proposals for change), have not been persuaded of the merit of the change. A constitution is an instrument that is intended to be permanent. It shouldn't be able to be altered by a temporarily fashionable political view" And As said by Sue Tongue, Principal Member and CEO of the Migration Review Tribunal "...having worked on a referendum campaign, I despair of ever getting any referenda through. ...read more.