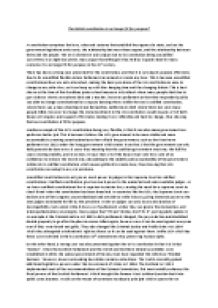 The British Constitution is no longer fit for purpose. Discuss.

Transfer-Encoding: chunked ﻿The British constitution is no longer fit for purpose? A constitution comprises the laws, rules and customs that establish the organs of a state, such as the government legislature and courts, the relationship between those organs, and the relationship between them and the people. The UK is distinctive and unique due to its constitution being uncodified (unwritten) in a single document, many argue that although it has held as in good stead for many centuries it is no longer fit for purpose in the 21st century. There has been a strong case presented for the constitution, and that it is carrying its purpose effectively. Due to its uncodified flexible nature Parliament can amend or create any laws. This is because uncodified constitutional laws are not entrenched, making the basic provisions of the UK constitution as ease to change as any other law, so it can keep up with the changing time and the changing Britain. This is best shown at the time of the Dunblane junior school massacre in Scotland where many people died due to gun violence where 14 students died and 1 teacher, however parliament at that time responded quickly was able to change constitutional law on guns banning them. Unlike the USA?s codified constitution, where there was a mass shooting in San Bernardino, California in 2015 where there too were many people killed, however to change the 2nd amendment in the ...read more.

They also changed the Criminal Justice and Public Order Act 1994 which they abrogated a defendant’s right to silence so it can be used against them. Unlike USA which has these Acts enshrined in their constitution (5th amendment) thus preserving human rights. On the other hand, a strong case was also presented against the UK’s constitution in that it is in fact “broken”. When the Scottish Parliament and the Welsh and Northern Ireland Assemblies were established in 1998, the Labour government of the day must have regarded this reform as ‘finished business.' However, issues surrounding devolution remain contentious. The Welsh Assembly gained additional legislative powers under the Government of Wales Act 2006. The Scotland Act 2012 implemented most of the recommendations of the Caiman Commission, this most notably enhances the fiscal powers of the Scottish Parliament. Which brought the famous West Lothian Question back into public consciousness. It calls on the House of Commons to adopt a principle which expects the UK government to act with the consent of only English MPs when proposing English­ only legislation, which toady creates the Grand legislature committee that only has English MP’s so they can vote for English laws. Uncodified constitution lets organic development as our constitution develops. Another criticism against the constitution is that it provides a weak protection for individual’s rights and civil liberties. ...read more.

The final criticism is that the UK constitution is sometimes difficult to know what it is saying. Confusion surrounds many constitutional rules because, they are become what a majority of MP?s want it to mean. This applies particularly to the constitution?s unwritten element. For example, the convention of individual ministerial responsibility requires that ministers are responsible for blunders made by their departments. But does this mean that they should resign when civil servants make mistakes or only when mistakes are made by ministers? Furthermore, does ?responsibility? implying that anyone has to resign, or just that the minister must provide answers and promise to put mistakes right? Thus coming to the conclusion that the constitution is made up as we go along. In conclusion, there are arguments for and against the claim that the constrictions is fit for purpose. Some argue that the constitution is not fit for purpose and often argue it should be codified, in order to set our rights in stone and make it clearer. On the other hand some argue that it is fit for purpose, who stress that its flexibility and adoptable rights. However my view, is due to its weak protection of rights and its vagueness, makes me come to the conclusion that the constitution needs to be codified because it is not fit for purpose. ...read more.