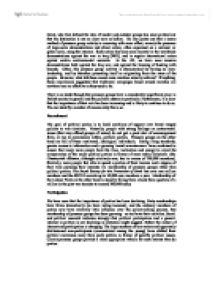 The changing nature and activities of pressure groups - to what extent are they becoming more important?

Grant, who first defined the idea of insider and outsider groups has since pointed out that the distinction is not so clear now as before. He also points out that a newer method of pressure group activity is occurring with more effect, namely the presence of large-scale demonstrations and direct action, often organised on a national or global scale, using the internet. Such action has been seen recently in the worldwide demonstrations against the war in Iraq (2003), and in regular international action against certain environmental summits. In the UK, we have seen massive demonstrations both against the Iraq war, and against the banning of hunting with hounds. Often, this pressure group activity is characterised by having no clear leadership, and by therefore presenting itself as originating from the mass of the people. However, what did these recent mass marches actually achieve? If anything, these experiences suggested that traditional campaigns based around marches are nowhere near as effective as they used to be. There is no doubt though that pressure groups have a considerably significant place in British society in general and the political system in particular. Furthermore, it is clear that the importance of their role has been increasing and is likely to continue to do so. ...read more.

At the same time, the European Parliament is becoming more influential. Therefore, lobby groups have sent increasing numbers of representatives to the Parliament and its committees. In 2005 there were more than 4200 accredited (that is, permitted to operate freely) lobbyists attached to the European Parliament. Of course, pressure groups continue to lobby national ministers, who make the final decisions, but there is ample opportunity for groups to put pressure on permanent institutions that have consciously opened their doors to representatives of interest groups. It is often argued that the European Union is an undemocratic body and, in the traditional sense of 'parliamentary democracy', that is probably so. But it is also noteworthy that the European Union accepts that the representation of interests is vital if they are to recommend policy which will enjoy popular consent. Second, groups have understood that they must unite with their European counterparts if they are to exert effective pressure. So we have seen the development of an increasing number of 'federated' groups in Europe. All major trade unions, producer groups and environmental campaign organisations, for example, have developed their own European-wide institutions. The brief list of examples of European pressure and interest groups shown below gives a flavour of the range of issues being treated in this way: * European ...read more.

Certainly there is a good deal of evidence to suggest that modem governments are responsive to mass political movements - nearly always outsiders - provided they can demonstrate widespread support. The Countryside Alliance has certainly found this, as have old-age pensioner groups, development aid campaigners and environmentalists. Direct action, when properly organised and well supported, is growing in importance. Summary Many millions of British citizens consider themselves to be detached from the political process. There has been growing disillusionment with traditional party politics; fewer people than ever bother to vote in elections; and party membership has been falling steadily. But there is a different perspective that we can adopt. In terms of pressure group activity, especially since the emergence of new social movements, it could be claimed that political activity and participation have never been higher. Though a decreasing number of people identify closely with any political party or ideology, a growing number are willing to take positive action in pursuit of a cause about which they feel passionate. Furthermore, as representative institutions - especially parties and Parliament - have become increasingly marginalised and impotent, there has been a renewed interest in the influence of direct action. As long as we enjoy an independent civil society, and as long as politicians remain sensitive to public opinion, pressure groups will remain a key feature of British democracy. ...read more.