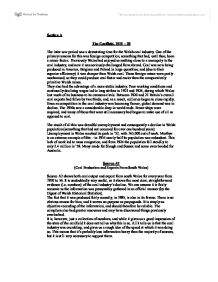 Section A The Coalfield, 1919 - 39 The inter-war period was a devastating time for the Welsh coal industry. One of the primary reasons for this was foreign competition, something that had, until then, been a minor factor. Previously Wales had enjoyed something close to a monopoly in the coal industry, and now it was seriously challenged from abroad. Coal was now being produced in America, Belgium and Poland in large quantities, and (due to their superior efficiency) it was cheaper than Welsh coal. These foreign mines were partly mechanised, so they could produce coal faster and easier then the comparatively primitive Welsh mines. They also had the advantage of a more stable industry. Poor working conditions and continually declining wages led to long strikes in 1921 and 1926, during which Wales lost much of its business to its overseas rivals. Between 1920 and 21 Britain's overall coal exports had fallen by two thirds, and, as a result, collieries began to close rapidly. Even as competition in the coal industry was becoming fiercer, global demand was in decline. The 1930s saw a considerable drop in world trade. Fewer ships were required, and many of those that were still necessary had begun to make use of oil as opposed to coal. The result of all this was dreadful unemployment and consequently a decline in Welsh population (something that had not occurred for over one hundred years) Unemployment in Wales reached its peak in '32, with 165,000 out of work. ...read more.

In 1935, strikers at Nine Mile Point colliery (in Cwmfelinfach) initiated the first 'stay-down' strike in an effort to prevent any work continuing in the mine. This shows just how strong the miners' desire to fight was. They would put themselves through misery and risk their health to attack the mine owners and, possibly even to a greater extent, the strike breakers. This example was quickly followed elsewhere, and while it served its purpose, it caused permanent damage to many miners' eyesight. Section C The Effects of the Depression Years on Coalminers and their Families For the average welsh citizen, the depression meant severe poverty. Since most were on the dole, a family's income was quite consistent throughout the country, and it was barely enough to feed them. Many families could not afford to clothe everyone at once, and those who were dressed rarely had enough to keep warm. For the men, life was monotonous and unfulfilling. They would follow the same degrading routine each day, and spend most of their time at home, bored and depressed. This, along with the reduced funds, added greatly to the woman's workload as she desperately tried to keep the family functioning with so little. The situation became so desperate that unemployed men would work long, often dangerous shifts to be paid only in coal. An eight hour shift would be rewarded with four bags, saving (for the average family) only around six pence a week. There were those that couldn't get even this form of employment, and some simply searched tips and outcrop levels alone. ...read more.

Perhaps, then, this boom in the film industry (with families going two or three times a week) is not the mark of a happy community, but one that is deeply depressed. The fact that comedy was the most popular genre at the time supports this theory. Looking solely at the aspect of cinema, this is without doubt the most important source. Some information was unnecessary, (such as the names of Porth's cinemas) but the majority is material to the question. While the source is far from answering the question, it does give some useful information, and I did make use of it. Conclusion Life during the inter-war period was, on the whole, unpleasant for Welsh mining families. This can be mainly attributed to the poverty they endured, the bitterness and loathing they felt towards mine owners and strike breakers and a general feeling of emptiness as male life lost much of its purpose (due to unemployment). The national obsession with film and radio only emphasise this, as it is used as escapism in almost the same way as drugs are. Of course, this only really applies to those who had known a better life. As William Thomas says, "If you were brought up in a mining community you just accepted life as it was." For him, life had its ups and downs, as it did for anyone. The hardship he was born into simply meant that "a holiday in a tent at Porthcawl once a year" was cause for excitement, and that working in a pit for 50p a week was just life. ...read more.