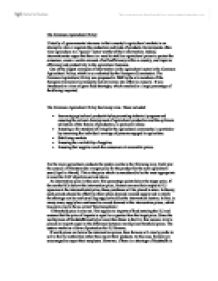 Consumers lost out in two ways. First, they had to pay directly for food, which was much higher in price, than it would otherwise have been if it had been bought on world markets. Second, as taxpayers they had to pay for the heavy costs of running the CAP. In theory, he CAP should have been fairly inexpensive to run. If there was a glut of produce on the market in one season, the EU would buy some of it at the intervention price and store it. The next season, when there was perhaps a shortage, the EU could take the produce out of storage and sell it. Prices would not fluctuate by as much as under a market system and the sale of produce would ensure that the major cost of the system would be administration and storage. In practice the cost of CAP rose year after year. This was due to the CAP agencies buying more than they were selling. The CAP resulted in considerable excess of many agricultural products. The longer-term effects on supply magnify the problem. As producers are now faced with a guaranteed demand for their products, there is every incentive to produce more. This is exactly what happened in Europe during the 1970s and 1980s. Producers began to increase their levels of production of agricultural products, which led to the accumulation of large surpluses of certain farm products. These surpluses are expensive to store and export, and if they are sold abroad at relatively low prices, they tend to lower world prices and hence reduce the incomes of producers in other countries. ...read more.

In particular a quota system for milk was imposed. Each farm in the EU was given a milk quota based on existing production levels minus a given percentage to reduce the milk surplus, which had developed. This is demonstrated in the diagram below. A quota at output level Q2 restricts the supply of milk. This reduces the excess supply from a level of Q3 - Q1 to a smaller level of Q2-Q1, therefore reducing the expenditure under CAP. The financial crisis worsened despite this and in 1987 Cap was forced to transfer some spending over into 1988 because it had run out of money in its budget. This led to the member countries agreeing to an increase in spending on CAP. In 1980s there was a general agreement that the CAP should be reformed further. The reforms since 1985 have tended to tackle the outcomes rather than the root cause of the problem. The root cause of the problem was that agricultural prices had been set too high in relation to the world price. Too high prices encourage farmers to produce too much and discourage consumption. Surpluses have to be disposed of, sometimes onto world markets at knock down prices, which angers farmers in other countries who complain on 'unfair competition'. The reforms have concentrated on restricting supply rather than reducing prices. This had consequently not been successful. The MacSharry reforms aimed to lower agricultural prices to levels, which were more in line with world prices. This was one of the only reforms, which had proved successful. This was hopefully the end to large surpluses. ...read more.