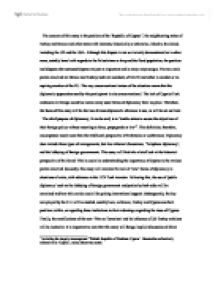 The concern of this essay is the position of the 'Republic of Cyprus'[1], the neighbouring states of Turkey and Greece and other states with interests, historically or otherwise, linked to the island, including the UK and the USA.

The concern of this essay is the position of the 'Republic of Cyprus'1, the neighbouring states of Turkey and Greece and other states with interests, historically or otherwise, linked to the island, including the UK and the USA. Although this dispute is not so violently demonstrated as in other areas, notably Israel with regards to the Palestinians or Iraq and the Kurd population, the position and disputes that surround Cyprus are just as important and in many ways unique. The two main parties involved are Greece and Turkey; both are members of NATO and either a member or an aspiring member of the EU. The very unconventional nature of the situation means that the diplomatic approaches used by the participants is also unconventional. The lack of Cypriot Turk embassies in foreign countries means many usual forms of diplomacy have no place. Therefore, the focus of this essay will be the less obvious diplomatic advances in use, as will be set out later. The chief purpose of diplomacy, It can be said, is to "enable states to secure the objectives of their foreign policy without resorting to force, propaganda or law"2. This definition, therefore, encompasses much more than the traditional perspective of Embassies or conferences. Diplomacy does include these types of arrangements, but also informal discussions, 'Telephone diplomacy', and the lobbying of foreign governments. This essay will first take a brief look at the historical perspective of the island. ...read more.

Yet both these play the important diplomatic roles, using the definition given earlier, of influencing a foreign government policy towards the situation. This approach is known as 'public diplomacy'9, and both the Greek and Turkish sides have used this in attempts to win support. For example, Greek-American organisations have had influence on US foreign policy. In the Clinton administration, one policy advisor was George Stephanopoulos, who many have seen as key in influencing the foreign policy regarding Greece or Greek interests10. The Cypriot Turk side has also used public diplomacy to its advantage. The 'Friends of Turkish Cypriots' is a cross-parliamentary group in the British House of Commons. Although the UK, like all countries except Turkey, does not recognise the TRNC and has no official ties with it, this group has met many times with Cypriot Turk leaders, including Raul Denktat. This has given them the ability to present their views to the foreign office or express them in parliament. Also, other groups act to lobby governments, such as the Turkish Cypriot Network, set up in the UK in 1995. It lists among its aims and activities that it "lobbies parliamentarians and local and national politicians...in order to promote the just cause of the Turkish Cypriots...and the recognition of the TRNC"11 The role of the European Union is very crucial to the Cyprus situation. ...read more.

Also, the possible use of veto to block defence arrangements between the EU and NATO has no doubt influenced policy of many states. Also the Cypriot Greek led government of Cyprus' application for EU membership itself put pressure on the Cypriot Turk side, as this essay has explained, the Turkish forces would become officially foreign forces in occupation. Finally, this essay has seen how the 'War on Terrorism' has possibly extended the avenues open to Turkey to win support. This essay did eschew the direct negotiations between the Cypriot Turk and Cypriot Greek sides on the grounds that they did not act 'to win support'. Although this remains accurate, the context of these negotiations does act in this sense, as the two sides' claim being more receptive to the negotiations. Other factors omitted from this essay, for various reasons, include the role of the UN as mediator and the economic embargo placed on the 'TRNC' by Cyprus and the EU at large. Given all these factors, this essay has found that although the situation allows for little formal, conventional diplomatic efforts, other forms of diplomacy have played key roles and these cannot be ignored. A solution to the conflict requires support of many 'outside' interests, including the EU, UN and NATO most obviously, and the key participants of this dispute have used many diplomatic approaches to gain advantage for their position. ...read more.