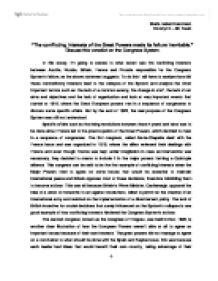 &quot;The conflicting interests of the Great Powers made its failure inevitable.&quot; Discuss this veredict on the Congress System.

"The conflicting interests of the Great Powers made its failure inevitable." Discuss this veredict on the Congress System. In this essay, I'm going to assess to what extent was the conflicting interests between Austria, Russia, Britain, France and Prussia responsible for the Congress System's failure, as the above statement suggests. To do this I will have to analyse how did these contradictory interests lead to the collapse of the System and analyse the other important factors such as: the lack of a common enemy, the change in staff, the lack of set aims and objectives and the lack of organization and look at very important events that started at 1818, where the Great European powers met in a sequence of congresses to discuss some specific affairs. But by the end of 1822, the real purpose of the Congress System was still not understood. Specific affairs such as the rising revolutions between those 4 years and what was to be done about France led to the preoccupation of the Great Powers, which decided to meet in a sequence of congresses. The first congress, called Aix-la-Chapelle dealt with the France issue and was organized in 1818, where the allies reviewed their dealings with France and even though France was kept under invigilation in case an intervention was necessary, they decided to create to include it in the major powers forming a Quintuple alliance. ...read more.

With all that, as a bonus, Metternich is also able to hinder British (as he had indirect British assistance and the British were quite happy with Metternich's measures) and Russian expansion. Again, the difficulty between the main powers to comprehend the concepts of the happening events was a big obstacle for their common harmony, and the Congress System's fall down was partially due to Metternich's abilities and triumph. By 1823, Metternich, that was too worried in manipulating other leaders, was incapable of putting down some revolutions and these ones took great proportions. So France seeks this opportunity to prove its independence and invades Spain outside the congress system and stops the revolution. France was also improving diplomatic relations with Russia as they had 2 common enemies; Austria and Britain. In the same year, Castleareagh dies suddenly and is replaced by Canning- whose policy was to not get involved in European dealings. In 1827, Tsar Alexander dies and is replaced by Nicholas- whose policy was totally against Metternich and he wanted to bring back together Greece and Russia in their religious union. This leads to an invasion in 1827 where a new sovereign Greece is formed. This all proves that if the European Powers really had the intention of securing international harmony and if they had acted accordingly, the Congress System maybe would have been triumphant. ...read more.

The lack of organisation in the Congress System is another extremely important reason for its failure. It is really easy to spot it, as the congress did not have any kind of foundation document to make the Quintuple Alliance work together and no set of signatures. There were no regular meetings, the congress only occurred when it was necessary. To the actual fact, the congresses were simply meetings of the leaders of the European powers to discuss the problems being faced. This lack of organization decreases the efficiency of the Congress System dramatically as actions took longer to be taken and its reliability was smaller as no signatures and documents were actually produced. To answer if a system was successful or not, we need to know if it was able to accomplish it's aims. However, the Congress System did not have any aim to achieve, proving its disorganization and irrelevance. The historian LCB Seamen even goes further and says that the Congress System, as many other systems studied in history, was an invention of the historians. Maybe his opinion is too radical, but we can conclude that there were other very significant factors that made the failure of the congress system inevitable apart from the conflicting interests of the major powers - but the conflicting interests were the most significant motive of the collapse of the Congress System. Maria Isabel Kossmann History HL - Mr. Nash -1- ...read more.