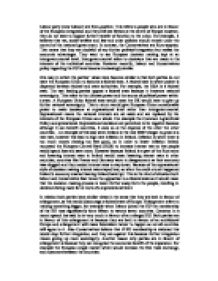 The Conservatives and Labour policies regarding the EU have become increasingly similar. Discuss.

Labour party (new Labour) are Euro-positive. This refers to people who are in favour of the European integration and they still see Britain at the centre of Europe however, they do not want to support further transfer of function to the union. For example, it believes that tax, social welfare and law and order policies should remain under the control of the national government. In contrast, the Conservatives are Euro-sceptics. This means that they are doubtful of any further political integration but realise the economic advantages. They want to see European decision making kept at an intergovernmental level. Intergovernmental refers to decisions that are made in the interests of the individual countries. However recently, Labour and Conservatives policy regarding the EU have become increasingly similar. One way in which the parties' views have become similar is that both parties do not want the European Union to become a federal state. A federal sate is where power is dispersed between federal and state authorities. For example, the USA is a federal state. The two leading parties oppose a federal state because it threatens national sovereignty. This refers to the ultimate power and the source of political power within a state. A European Union federal state would mean the UK would have to give up further national sovereignty. ...read more.

Also Conservatives believe that if EU membership is widened this would stop further integration, and they are against this because further integration means giving up more sovereignty. Another reason why parties are in favour of enlargement is because they can recognise the economic benefit of the expansion. For example the European single market which would increase the free trade exchange, and customers between the countries. Another way in which the parties' views have become increasingly similar is that both Labour and conservatives want reform of the common fisheries (CFP) policy and the Common Agricultural policy (CAP). The CFP gives countries a quota of how much fish they can catch. The CAP is aimed at agricultural farmers providing a plentiful and stable food supply and the maintenance of food productivity in the countryside. In particular, the CAP has proved to be the most unpopular aspect of the European Union's budget, because countries that do not have large agricultural sectors, the UK being the key example, tend to suffer as a result. For example roughly 45% to 50% of the European Union's budget goes to the CAP. In 2007, the proportion of CAP expenditure in France was 20%, with the UK and 9% and others lower. This shows that France and Germany benefit most out of the CAP because a larger agricultural sector, but countries which have larger manufacturing and service sector, do not receive as much support. ...read more.

Labour Described the Lisbon Treaty as just clarifying what powers the European institutions have. In contrast, the Conservatives never signed the treaty because they never approved of some of the regulations it involved. For example within the treaty there was to be a fundamental charter of human rights to be applicable to all member states. The conservatives thought this was unfair as countries should be left to decide their own human rights according to the culture of the country. It also meant that they would have to give up further national sovereignty, which they already oppose. Although there are fundamental differences between the two parties in regards to the EU, the similarities seem to out weigh the differences. Both parties agree on points that have the potential to change the complete structure of the UK, like the idea of a federal Europe. It is essential that both parties are able to agree on these larger and more vital points as an united front is likely to be a lot more effective on an EU level and is perhaps likely to have a greater impact when it comes to making the decisions. Also both parties agree with working with the country's best interest in mind which is an essential element in a democracy, due to the fact that the government is directly accountable to the public therefore the decisions they make should reflect public's opinion. . ...read more.