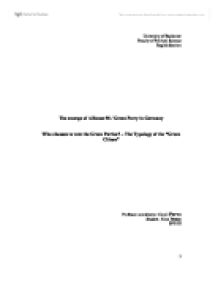 The emerge of Alliance 90

The emerge of Alliance 90 / Green Party in Germany

Who chooses to vote the Green Parties? – The Typology of the “Green Citizen”

Green parties have rapidly become a familiar feature of the political landscape, particularly in Europe. The first green parties were formed in Tasmania and New Zealand in 1972, and the Swiss elected the first green to a national assembly in 1979. By the late 1990s, green parties were sufficiently established to have joined national coalition governments in Belgium, France, Germany and Italy, to have elected deputies in server other national parliaments and wide representation in sub-national government.[1] In 1999, the first Green European Commissioner was appointed. The greens have clearly made their appearance and their message seems to have sufficient coherence and resonance to exert an electoral call that goes beyond national boarders. How do we account for the rise of green parties? Do they simply reflect a specific public concern about the state of the environment, or is their appearance a need for a new politics? Who are the people that green parties message appeal to?

Green parties have achieved their main electoral success in Northern and Western Europe. In four countries, West Germany, Belgium, Switzerland and Luxembourg, green parties averaged at least 5 percent of the vote during the 1980s and regularly won seats in national parliaments. The German and Belgian greens have proved most successful.

The aim of this paper is to analyze the role of the German Green Party – Alliance 90/Die Grunen and to compare the social characteristics and political views of this party’s voters. Who are the people that choose to vote for this party? Why is the Green Party so popular in Germany compared to other countries? Are the green parties going to last or are they simply something that will soon disappear?

According to Neil Carter “The Politics of the environment: Ideas, Activism. Policy”, “ecologism is an ideology built on two main ideas: a reconceptualisation of the human-nature relationship away from strong anthropocentrism and an acceptance of the idea of limits to growth. It draws its subsidiary principles, such as participatory democracy, decentralization and social justice, from other political traditions, but the relationship is not all one way”. Established political ideologies have been influenced by the ideas developed by ecologism.

With the rise of modern political parties as mass-membership organizations in the 19th century the relationship between the different hierarchical levels of party organization became the focus of early political sociology.

In Germany the debate about the undesirable effects of the “party state” and “the crisis of parliamentary democracy” became acute in the 1960s and 70s. One factor was the grand coalition federal government (1966-1969) which, along with the student revolt, gave rise to an extra parliamentary opposition, to civic action groups and to new social movements, whose militants had often been disappointed by the established political parties and their poor responsiveness to the field of the new politics. One result was that protagonists of parts of the growing new social movements – comprising predominantly the peace movement, the anti-nuclear energy respectively the environmental movement and the feminist movement – decided to form a new party. After first successful participation of Green party lists in regional elections[4], “DIE GRUNEN” as a federal party was finally founded in 1980, consisting of very heterogeneous political groups.

As the existence of a rather closed class of professional full-time politicians within the disliked established parties was seen as the basic problem in German party democracy, the newly created party organization was structured corresponding to the principle of grassroots[5] democracy in order to prevent a future party elite from moving away from the ordinary participants of the new party. Thereby the goal was to maintain the unity of the political party with the social movements. The underlying main aim of grassroots party democracy was the securing of an undistorted transmission of the political intentions and desires of the represented members up to the top executive committee and guaranteeing the party leaders’ responsiveness to the ordinary members by specific means. The exceptionally structured party organization and special rules laid down in the party statutes mark the difference between the grassroots democracy of the Greens and the intra-party democracy of the other German parties.

Since then, twenty-seven years have passed and the party has undergone a deep change. During the first decade conflicts arose between factions and personalities especially over the issue of participation in government with the Social Democrats at regional and federal level. Far from being an “anti-party party”, as one protagonist of the Greens described her party in its early period, Alliance 90 / The Greens now find themselves since 1998 at the heart of power as the smaller coalition partner in the federal government. Thereby the Greens have themselves become part of the establishment, following the motto of changing society from inside its political institutions instead of only from outside and by fundamental opposition.

The question that I want to answer mainly is: Do the Greens fulfill their claim of representing their electorate in a truthful way? The aim of this paper is to find out whether and in which ways party activists of Alliance 90 represent their voters. I realize that is necessary to explain here, how voters are represented. For this I have chosen the representation model of Hannah Pitkin in

“The Concept of Representation”.  My theoretical discussion on representation is based on Pitkin’s classification of types of representation. “Representation, taken generally, means the making present in some sense of something which is nevertheless not present literally or in fact.”[6]

She identifies four theoretical groups that taken all together come to an extensive understanding of representation:

4. Representing as ‘acting for’: In this sense, “representation is a certain characteristic activity, defined by certain behavioral norms or certain things a representative is expected to do”[9]

From a stronger grassroots democratic point of view and in the tradition of Rousseau’s notion of identical democracy[10], identity of social characteristics and ideology between representatives and represented in the sense of descriptive representation is seen as a value in itself.

“In their election manifesto, the Greens are addressing the voter directly, asking them to vote for an ecologically-friendly future. They demand participation in society and the labour market for all. For them, freedom requires social security. Highlighting Green achievements during their time in government – the reform of the tax system, the lowering of wage incidentals, the increase of the child benefit and the reforms of the social security system and the labour market – the party believe to have improved the general conditions for enterprises to generate more employment. On those who are missing the positive economic effects, the Greens call to be patient as reforms take time to materialize in progress. The Greens want to concentrate research on renewable sources of energy and to make them the energy sources of the future. Further goals are to strengthen the service sector, using the productive capacity and added value of immigrants, give priority to the reduction of working hours, demand a minimum wage, expand basic social security, invest in labour, education and childcare whilst consolidating the public budget. The Greens also want to strengthen consumer protection, promote early learning and conduct ethical research. Finally, they aim for clearer distribution of competencies through a reform of the federal system.”[11]

Who is voting for the Green Party in Germany or in general? Citizens that believe that a new politics is need. People that believe in the creation of a just, equitable and sustainable society are the ones that vote for the relatively new ideology. Are the green parties here to stay? My answer is yes. In my opinion human beings need something new, something that addresses every day problems: pollution, defending animal’s rights, and protecting the environment are few of the issues “attacked” by the Greens in most of the cases. The relationship between humans and nature cannot be separated and treated in isolation.

There is no single argument to explain the need of green parties. There is some support for the claim that green parties are an expression of a new politics. Green parties do draw support disproportionately from the “new middle class”, but this statistical relationship does not tell us very much as the majority of this group supports other parties.

[4] The first four Green parliamentary seats at regional level were gained in the city-state of Bremen in 1979.

[5]Grassroots political movement is one driven by the constituents of a community. The term implies that the creation of the movement and the group supporting it is natural and spontaneous, highlighting the differences between this and a movement that is orchestrated by traditional power structures. (source: http://en.wikipedia.org/wiki/Grass_roots).

[6]Pitkin Hannah - “The Concept of Representation”University of California Press, 1967, pp 8-9.

[10] The rulers should be identical with the ruled