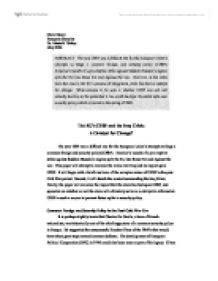 The EU's CFSP and the Iraq Crisis: A Catalyst for Change?

Chris Moore European Security Dr. Mustafa T�rkes May 2006 The EU's CFSP and the Iraq Crisis: A Catalyst for Change? The year 2003 was a difficult one for the European Union's attempts to forge a common foreign and security policy (CFSP). America's launch of a pre-emptive strike against Saddam Hussein's regime split the EU into those For and Against the war. This paper will attempt to examine the crisis over Iraq and its impact upon CFSP. It will begin with a brief overview of the complex nature of CFSP in the post-Cold War period. Second, it will sketch the context surrounding the Iraq Crisis. Finally, the paper will examine the impact that the crisis has had upon CFSP, and speculate on whether or not the crisis will ultimately serve as a catalyst to reformulate CFSP in such a way as to prevent future splits in security policy. Common Foreign and Security Policy in the Post-Cold War Era It is perhaps slightly ironic that Charles De Gaulle, a hero of French nationalists, was historically one of the chief supporters of a common security policy in Europe. He supported the unsuccessful Fouchet Plans of the 1960's that would have taken great steps toward common defense. The development of European Political Cooperation (EPC) in 1970 could also been seen as part of his legacy. Given De Gaulle's dislike of supranationalism, this seems a bit odd. But when one begins to exam the nature of the EPC and its offspring CFSP, the connection with De Gaulle begins to make sense. In matters as important as war and peace, De Gaulle saw no place for supranationalism. His priority was always France. At the same time, he recognized that Europe needed to cooperate and pool its resources in order to challenge the superpowers of America and Russia. EPC was an attempt to bridge that gap - promoting cooperation but protecting sovereignty. ...read more.

This inefficient arrangement was replaced by the Amsterdam Treaty which specified that non-military CFSP matters were to be submitted to the Community budget and military costs divided amongst the members in proportion to their relative GDP. The challenge with this arrangement is that many joint actions which the CFSP might decide to implement will likely have civilian and military components, making the costs difficult to separate. The resourcing of CFSP initiatives is also hampered by the official neutrality of some EU members (Ireland, Austria, Finland, and Sweden). Some members have very little in terms of military capability to offer. In addition, the Amsterdam Treaty introduced the concept of "constructive abstention" whereby a member could abstain from voting on a CFPS matter, and thereby allow the motion to pass, but reserve for itself the right to choose whether it applied the decision or contributed to the action in any form. The Iraq Crisis The purpose of the preceding section was to enumerate some of the areas in which CFSP is inherently challenging. These challenges and obstacles were present well before the Iraq Crisis of 2003 took place. We will now look at several challenges specific to the context surrounding the Iraq Crisis that added another layer of difficulty for the EU in attempting to craft any type of common stand towards the situation. US Elections and the Bush Doctrine The debate over Iraq's WMD capabilities and its possible links to terrorist organizations began to heat up at the same time that the US was heading into mid-term elections (November 2002). Although the President himself was not facing a re-election, Democrats and Republicans were fighting for control of the House and Senate. The attacks of September 11, 2001 were still very fresh in the minds of the American public and the "war against terrorism" was a, if not the, major election issue. In January 2002, President Bush gave his famous "Axis of Evil" speech, which "attracted much hostile comment from Europe...as did both the subsequent US ...read more.

But many challenges remain. Even if the EU creates the new position of Minister of Foreign Affairs, such a person will still not represent the EU solely. He or she will be "one face" representing many faces. CFSP will remain intergovernmental. Duplicate systems in both diplomatic and military capabilities will remain. France and Britain can still bring divergent views to the UN Security Council. EU military spending is likely to remain low. However, it seems that one of the main difficulties with CFSP is that it is not fully comparable to the economic integration which many consider the success story of the EU. Unlike the creative ideas of Monet, Delores and other EU founding fathers, CFSP cannot be easily placed in a supranational sphere governed by technocrats. Thus, the previous method of step-by-step institutionalization may not be as effective in nudging members toward genuine CFSP. One scholar has made the counter-argument to this claim, namely that more institutionalization is needed urgently. This is the case, he argues, because the current High Representative of CFSP, Javier Solana, uses a method that is highly personal "and relies little on structural or institutional underpinning."23 This scholar goes on to suggest, "If Solana's achievements are not underpinned by such institutionalization by the time he leaves the post, this will represent failure. It will not be easy, because it is not the way he likes to work."24 It is easy to understand the rationality behind this claim. The EU has built itself through incremental institutionalization. Nevertheless, is incremental institutionalization the path for CFSP? Not necessarily. Diplomacy is not economics. Peacemaking is not trade. Matters of global politics often arise instantly and require quick decisions. They are rarely technical matters alone. Furthermore, relationships can matter. It seems that Mr. Solana understands this, and has used his relational gifts to help CFSP move forward. We might conclude, then, that the EU will need yet another "creative solution" in order to bring about meaningful CFSP. The solutions of the 1950's, or even the 1990's may prove inadequate to the task. ...read more.