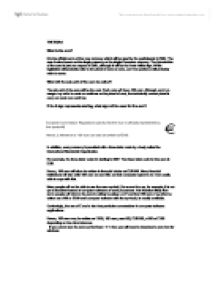 THE EURO What is the euro? It is the official name of the new currency which will be used by the participants in EMU. The euro is also known as the single currency or the single European currency. The introduction of the euro is just one aspect of EMU, although it will be the most visible sign. While legislation will probably refer to the plural of euro as euro, common parlance will probably refer to euros. What will the sub-unit of the euro be called? The sub-unit of the euro will be the cent. Each euro will have 100 cent. Although common usage may refer to cents or centimes as the plural of cent, the technically correct plural is cent, not cents nor centimes. If the � sign represents sterling, what sign will be used for the euro? European Commission Regulations specify that the euro is officially represented by the symbol . Hence, a reference to 100 euro can also be written as 100. In addition, every currency is provided with a three letter code by a body called the International Standards Organisation. For example, the three letter code for sterling is GBP. The three letter code for the euro is EUR. Hence, 100 euro will often be written in financial circles as EUR100. Many financial institutions will also write 100 euro as euro100, as their computer systems are more easily able to cope with this. Many people will not be able to use the euro symbol for some time as, for example, it is not yet a standard feature of computer software or word processors. It is therefore likely that some people will refer to the euro in writing by using e or E and that 100 euro may often be written as e100 or E100 until computer software with the symbol is readily available. Confusingly, the use of E and e also has particular connotations in computer software applications. ...read more.

convert the Deutsche marks into euro: 10,000 � 1.95583 = 5,112.918811 (b) round the result to three or more decimal places as desired. In this example, the answer of 5,112.918811 above can be rounded up to 5,112.919 (ie three decimal places); (c) convert the rounded amount of 5,112.919 at (b) above into French francs: 5,112.919 x 6.55957 = FF33,538.550084; and (d) this sum can then be rounded down to FF33,538.55 If the conversion into French francs yields a result which is not an exact number of centimes, the result must be rounded up or down to the nearest centime in accordance with European Commission Regulations. If the result is exactly half way, the result must be rounded up. So, in the example, the sum of 33,538.550084 French francs was rounded down to 33,538.55 French francs. Alternatively, 10 euro may convert into 65.5957 French francs, which would then be rounded up to 65.60 French francs. 100 euro would then convert into 655.957 French francs which would be rounded up to 655.96 French francs. The fixed conversion rates must be used when converting between the national currency units. This method of currency conversion is designed to ensure accuracy and consistency of calculation. Conversion between the national currency units and currencies other than the euro (for example, between the French franc and sterling) may be made via the euro in a process similar to triangulation or by working out a cross rate. Conversions between other currencies will be unaffected by the strict conversion and rounding rules for the euro and the national currency units. Will the euro fluctuate/float against sterling? Yes. The euro will be a currency in its own right. If you need to exchange sterling for the euro there will be a fluctuating exchange rate. What will be the value of the euro compared with sterling? As sterling and the euro will fluctuate against each other, the exchange rate between the two currencies will change not just on every business day but throughout every business day. ...read more.