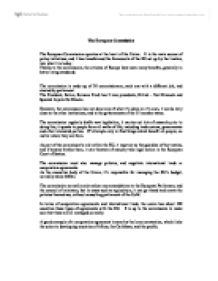 The European Commission The European Commission operates at the heart of the Union. It is the main source of policy initiatives, and it has transformed the framework of the EU set up by the treaties, into what it is today. Thanks to the commission, the citizens of Europe have seen many benefits, generally in better living standards. The commission is made up of 20 commissioners, each one with a different job, and elected by parliament. The President, Italian, Romano Prodi has 2 vice presidents, British - Neil Kinnock and Spanish Loyola De Palacio. However, the commission has not done any of what it's done on it's own, it works very close to the other institutions, and to the governments of the 15 member states. The commission regularly drafts new legislation, it carries out lots of research prior to doing this, it speaks to people form all walks of life, including trade unions, governments and other interested parties. IT attempts only to find things which benefit all people, no matter where they are from. As part of the commisson's role within the EU, it must act as the guardian of the treaties, and if anyone breaks them, it can threaten of actually take legal action in the European Court of Justice. The commission must also manage policies, and negotiate international trade or cooperation agreements. ...read more.

The Council of Ministers is the supreme decision making body of the E.U. and, as such has the final say in deciding upon E.U. legislation. Although the Council of Ministers does act on recommendations from the commission, it has got the power to instruct the commission to undertake particular investigations and to submit detailed proposals for it's consideration. Council decisions are made by a mixture of voting procedures. Some measures, for instance, only require a simple majority; in others; a procedure of qualified majority is used; and then there are those in which unanimity is required. In the Council of Ministers, different countries have different numbers of votes, depending on the size of their population. Some of the larger countries have 10 out of a total of 87 votes, and the smallest countries / member states may have as low as 2 votes. A qualified majority is where a minimum of 62 votes in favour is required. The effect of this compromise is a matter of some doubt, especially as the commission would subsequently call for a vote on the new basis as son as it felt that a reasonable time had elapsed. The European Council and the Council of the European Commission are identical, as they had simply changed their name to the latter. However, they differ greatly from the Council of Ministers. ...read more.