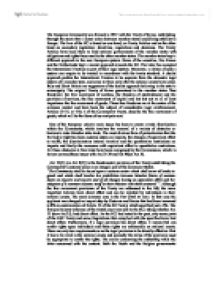 The European Community and ECJ

The European Community was formed in 1957 with the Treaty of Rome, establishing through the years that a closer union between member states could bring stability to Europe. The Law of the EC is based on one hand, on Treaty Articles and on the other hand on secondary legislation: directives, regulations and decisions. The Treaty Articles have been there to bind national governments of the member states with obligations and rights they owed to the other member states. The member states kept a different approach to the new European system. Some of the countries, like France and the Netherlands kept a monist approach towards the EC. The latter has accepted the International Treaties as part of their legal system. Moreover, a citizen of such a system can require to be treated in accordance with the treaty standard. A dualist approach prefers the International Treaties to be separate from the domestic legal system of a member state, and come to force only after the national courts have acted. Italy and Great Britain are supporters of the dualist approach believing in the state's sovereignty. The original Treaty of Rome guaranteed to the member states 'four freedoms'; the free movement of workers, the freedom of establishment and the provision of services, the free movement of capital and last but not at all of least importance the free movement of goods. These four freedoms are at the centre of the common market and have been the subject of considerable legal reinforcement. Articles 23-31, or Title I of the Community Treaty, describe the free movement of goods, which will be the focus of our analysis next. One of the European Union's main issues has been to create a trade liberalisation within the Community, which involves the removal of a variety of obstacles or barriers to inter-Member state trade. The most obvious form of protectionism that the EU had to fight has been customs duties on imports, the charges of equivalent effect to tariffs, the discriminatory internal taxation and the quantitative restrictions on imports and finally the measures with equivalent effect to quantitative restrictions. ...read more.

In Commission v Ireland C 249/81 the ECJ based on Art 28(ex 30) found that measures adopted by the government of a Member State that do not have binding effect, may be capable of influencing the conduct of traders and consumers in that State and hence frustrating the aims of the Community. In case 265/95 Commission v France (Re Private Protests) the ECJ stated that Art 28(ex 30) does not only take effect when a State create restrictions on inter-Member trade, but also when it refrains from taking the measures required in order to preserve the free movement of goods in the State. France government in fact, had taken insufficient measures to prevent French farmers from disrupting imports of agricultural produce from other MS. In Commission v Ireland Case 45/87, the use of Irish standards was held to be in breach of Community law since there could be materials made in other Member States that complied with different recognised standards and therefore should not be discriminated upon. Article 30 (ex Art 36) states: the provisions of Articles 28 and 29 shall not preclude prohibitions or restrictions on imports, exports or goods in transit justified on grounds of public morality, public policy or public security; the protection of health and life of humans, animals or plants; the protection of national treasures possessing artistic, historic or archaeological value; or the protection of industrial and commercial property. Such prohibitions shall not however, constitute a means of arbitrary discrimination or a disguised restriction on trade between Member States. Under Art 30 (ex 36) a Member State when defending its prohibition, has to prove its claim that a restriction is falling under the Articles scope. Furthermore, the MS has to show that there is no other less restrictive approach to trade that it could follow and that its discrimination is capable of justification on objectives grounds. In Rewe v Zentralfinanz (San Jose Scale) ...read more.

So in paragraph 18 of the judgement the Court gave its guidance to the national courts by allowing prohibition on resale at a loss, to fall outside the scope of Art 28 (ex 30). Moreover, the Court shifted the burden of proof from the member states (Cassis and Cinetheque) to the complainant to prove that measures do have equivalent effect in practise. After Keck the ECJ when it was met with selling arrangement cases demonstrated its position towards excluding those arrangements from Art 28 (ex 30). In Tankstation C 401 & 402/91 the Court repeated its Keck ruling and went on to conclude that rules relating to selling agreements should apply equally to all traders without prejudice towards the origin of goods. It is of great importance that the ECJ's decisions on taxation and duties charges have affirmed the Single Market's competence on intra Member State trade. The ECJ interpreted, through the cases, in the best possible manner, Art 23-25 (ex 9-12) to enable them protect the Treaty objectives. What is needed in future, especially after the enlargement from fifteen to twenty MS, should be a plan to tackle down major economic crime cases such as fraud and trade of illegal goods. Taxation on the other end could be fully resolved when national sovereignty will not matter any more. Only then could be a harmonisation on tax, when MS will operate under one common system of tax. The ECJ confirmed in Cassis its choice to interpret Art 28 (ex Art 30) on a wide area covering indistinctly applicable measures. The greatest consequence of this case has been that the MS do not have competence over trade rules. National rules can fall if they do not comply with EC/EU rules, with some exception as we saw earlier. This has not been the case anymore with the completion of the Single Market. The attention has turned since then, to ensuring that there is an efficient management of the Internal Market and the MS do not intervene with the legal framework. NIKOLAOS KTENAS 03019776 Pr. C. ...read more.