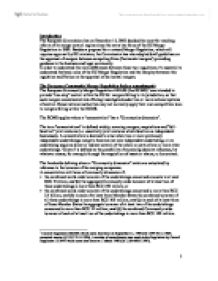 Introduction The European Commission has on December 11, 2002 decided the most far-reaching reform of its merger control regime since the entry into force of the EU Merger Regulation in 1990. Besides a proposal for a revised Merger Regulation, which still requires approval by EU ministers, the Commission has also adopted draft guidelines on the appraisal of mergers between competing firms ('horizontal mergers') providing guidance to the business and legal community. In order to understand the main differences between those two regulations it's essential to understand the basic rules of the EU Merger Regulation and the interplay between this regulation and Notice on the appraisal of horizontal mergers. The European Community Merger Regulation (before amendments) The European Community Merger Regulation 4064/89 (the ECMR)1 was intended to provide "one-stop" control within the EU for mergers falling to its jurisdiction, so that such mergers would avoid risk of being investigated under two or more national systems of control. Hence national authorities may not normally apply their own competition laws to mergers falling within the ECMR. The ECMR applies where a "concentration" has a "Community dimension". The term "concentrations" is defined widely, covering mergers, acquisitions and "full-function" joint ventures (i.e. essentially joint ventures which function as independent businesses). A concentration is deemed to arise when two or more previously independent undertakings merge to become one new independent undertaking; or an undertaking acquires direct or indirect control of the whole or parts of one or more other undertakings. ...read more.

Where a notified merger is the subject of an in-depth enquiry, it is proposed that an additional three weeks should be added to the timetable following the submission of a remedy offer, thereby allowing more time for the proper consideration of remedies, including the consultation of Member States. It is also proposed that up to four extra weeks could, with the agreement of the merging companies, be added to the timetable for the purpose of ensuring a thorough investigation, particularly in view of the high evidentiary burden that is incumbent upon the Commission in cases where it proposes to intervene; * The Commission's fact-finding powers would also be strengthened under the new proposal, thereby enabling it to more easily obtain information for the purposes of an investigation, including the possibility of imposing higher fines for failure to comply with requests to supply such information. This would, for example, mean an increase to 1% of aggregate turnover (from a current level of �50,000) in the fine companies may incur for supplying incorrect or misleading information. This increase is in line with investigative powers granted to the Commission under the new Regulation for the enforcement of Articles 81 and 82 adopted by the Council of Ministers on 26 November 2002; * The Commission's Green Paper launched also a reflection on the merits of the 'substantive test' enshrined in Article 2 of the Merger Regulation. ...read more.

It has to be acknowledged, however, that whilst the current EU merger control system has performed well, it has shown some strains. That is why, among other things, the Commission has come up with this Notice. The Notice reflect the experience acquired through the examination of the cases notified to the Commission and the European Courts' case law. It should resolve the shortcomings of the ECMR that have been appearing these years by clearly and comprehensively articulating the substance of the Commission's approach to the appraisal of "horizontal" mergers, thereby providing transparency and predictability regarding the Commission's merger analysis, and consequently greater legal certainty for all concerned, but it should at same time ensure that the original goals and merits of this regulation stay preserved. 1 Council Regulation 4064/89, which came into force on September 21, 1990 (OJ L395 30.12.1989, corrected version OJ L257 21.9.1990). A number of amendments were made to the Regulation by Council Regulation 1310/97 which came into force on 1 March 1998 (OJ L180 09.07.1997). 2 The first to point out that efficiency gains might offset enhanced market power was Williamson, Oliver E., 1968, "Economies as an Antitrust Defense: The Welfare Trade-offs", American Economic Review, 59,954-959. See also Farrell and Shapiro (1990) for a recent and elegant contribution which emphasizes the role of efficiency gains. 3 The Commission used possible cost reductions as an argument against the merger in at least one case. See AT&T/NCR, Case IV/M.050 (18 January 1991). 4 Case IV/M.053 (October 2, 1991), OJ L334/42, 1991, at 65. 1 ...read more.