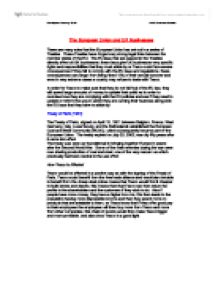 The European Union and UK Businesses

The European Union and UK Businesses There are many rules that the European Union has set out in a series of Treaties. These Treaties have forged very strong legal links between the member states of the EU. The EU laws that are passed in the Treaties directly affect all UK businesses; these laws give UK businesses very specific rights and responsibilities that they must abide by or Tesco could face severe consequences if they fail to comply with the EU laws and regulations, these consequences can range from being fined 15% of their annual turnover and even in very extreme cases a country may refuse to trade with Tesco. In order for Tesco to make sure that they do not fall foul of the EU law, they will spend large amounts of money to update their policies in order to overview how they are complying with the EU policies and see if they need to update or reform the way in which they are running their business along side the EU laws that they have to abide by. Treaty of Paris (1951) The Treaty of Paris, signed on April 18, 1951 between Belgium, France, West Germany, Italy, Luxembourg, and the Netherlands established the European Coal and Steel Community (ECSC), which subsequently became part of the European Union. The treaty expired on July 23, 2002, exactly fifty years after it came into effect. The treaty was seen as foundational in bringing together Europe in peace after the Second World War. ...read more.

This ambitious goal, summed up in 282 detailed measures, was broadly reached in the foreseen term. The common market became a reality. Different procedures were passed to coordinate the monetary policy of the member States, paving the way toward the objective of economic and monetary union. The Single Act included diverse initiatives to promote integration in the spheres of social rights (health and the workers' security), research and technology, and environment. To achieve the objective of a greater economic and social cohesion among the diverse countries and regions of the Community, reform and financial support to the denominated Structural Funds, European Agricultural Guidance and Guarantee Fund (EAGGF), European Regional Development Fund (ERDF), European Social Fund (ESF) was settled. How Tesco is Affected Tesco would be at a disadvantage by this law as; Tesco would now have to offer initiatives to make sure that their workers safe in the workplace. However Tesco also stand to benefit from such a law as, the law sets down a policy which is know as the ERDF (European Regional Development Fund), this fund provides money for a businesses that are willing to extend and develop into areas of Europe that are in economic deficit. This would benefit Tesco in two areas, the first area would be that Tesco would grant to expand and employ people in the area. The second area would be that that Tesco's corporate image would be improved, as they would be seen to be taking an active art in helping the poorer people of the countries that they operate in. ...read more.

Although implementing the facilities to make sure that Tesco is in compliance with the social policy is expensive, it is in the interests of Tesco to make sure that they are in compliance with the social policy, as in the long term Tesco will actually save money as they will have the correct services and facilities in place so that they can provide these facilities and services to their employees so that Tesco can say that they are following the social policy and are implementing the requirements as set down in the social policy. Over past years Tesco has strived to make sure that it offers the best working conditions for its employees, as Tesco know that in order to maintain its position in both the United Kingdom and in the European Union its employees are at the heart of delivering the award winning service, so Tesco go to great methods to preserve and develop the working conditions for its employees. Tesco would be affected in a positive way as they would be given a grant to set up in a deprived area, this means that if Tesco for example set up in the Czech Republic, they could be given a grant for setting up here as Tesco would seen to be employing people from a deprived area which needs regeneration and re development. Tesco will take full advantage of these schemes as it does not only provide money but also Tesco will get the good corporate image promoted as a good one as they are prepared to operate in a deprived area. Christopher Conway 12JIB AVCE Business Studies ...read more.

***
A detailed and organised piece of writing that considers a range of EU law and its impact on Tesco specifically.
There is evidence of lots of reading and research, but this has predominantly been deployed in the form of description, rather than analysis.
The essay does not make it clear why Tesco has been concentrated on specifically when the remit appears to refer to the impact of the EU on UK businesses.
The essay also lacks a conclusion to summarise the main points and directly answer the question.