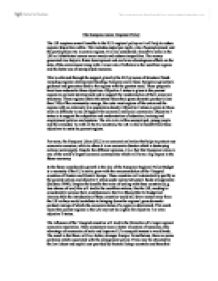 The European Union: Regional Policy The UK acquires several benefits to the EU's regional policy as it will help to reduce regional disparities within. This includes output per capita, rate of unemployment and the participation rate in certain regions. It is also considered a benefit to some in the UK as it distributes income more evenly and reduces inequalities. The money generated also helps to foster development and can have advantageous effects on the state of the environment along with a lower rate of inflation in the wealthier regions and the better use of unemployed resources. This is achieved through the support given by the EU by means of structural funds including regional development funding, European social fund, European agricultural guidance and guarantee fund to the regions with the greatest need. These proposals have been reduced to three objectives. Objective 1 status is given to the poorest regions to promote development and to support the modernisation of their economic structures. ...read more.

Should the EU budget not increase then the introduction of these countries would still draw money away from the UK as they would contribute to bringing down the regional gross domestic product average of which the economic status of a region is determined. This could mean that poorest regions in the UK may not be eligible for objective 1 or even objective 2 status. The influence of the Visegrad countries will lead to the formation of a larger regional economic association. More consumers mean a better allocation of resources, take advantage of economies of scale and improve EU's competitiveness in world trade. The result is that there will be a better, stronger Europe. Nevertheless, there are some problems which associated with the enlargement policy. Firms may be attracted by the low labour and capital cost provided by Eastern Europe countries and therefore causes unemployment level in Western European to increase. ...read more.

Negotiations for an agreed solution between all these countries will be difficult, and the UK will now only become one voice in twenty five. Each country will have different priorities in terms of the economy, different economic infrastructure, position and situation. Appropriate decisions are necessary to adjust and improve each country's own situation and is therefore hard to make all the members agree on a single policy that can satisfy all the member countries. Further investigations can be carried out through researching the different institutions responsible for the organization and enlargement of EU such as the Council of the EU, European Commission, European Central Bank, European Parliament, etc. This will allow a deeper insight into how the EU organizes and faces the existing problems. Investigating each member country's EU department would allow different perspectives to be viewed on how they may deal with the arising situations. Surveys, research of arguments and opinions are necessary to analyse whether EU growth will be favourable for the economy. Careful considerations are required as it will affect the whole UK and its economy. ...read more.