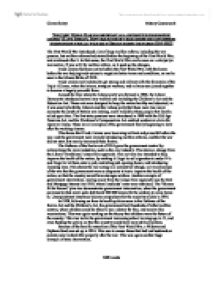 'The First World War was important as a locomotive for domestic change' (Clive Emsley). How true is this of trade unions and government intervention in social welfare in Britain during the period 1914-1922?

'THE FIRST WORLD WAR WAS IMPORTANT AS A LOCOMOTIVE FOR DOMESTIC CHANGE' (CLIVE EMSLEY). HOW TRUE IS THIS OF TRADE UNIONS AND GOVERNMENT INTERVENTION IN SOCIAL WELFARE IN BRITAIN DURING THE PERIOD 1914-1922? The First World War introduced a lot of large welfare reform, including the war pension, but welfare reforms had started before the beginning of the First World War, and continued after it. In that sense, the First World War can be seen as a catalyst (or locomotive, if you will) for welfare reform, as it sped up the changes. Trade Unions had been active before the First World War, with the boom before the war helping trade unions to negotiate better terms and conditions, as can be seen in the Miners Strike of 1910. Trade Unions really started to get strong and militant with the formation of the Triple Alliance, when the miners, transport workers, and railway men joined together to become a hugely powerful force. Around the time when the Labour party was formed in 1906, the Liberal Democrats introduced several new welfare acts including the Children's Act and the Education Act. These acts were designed to keep the nation healthy and educated, as it was seen by both the Liberals and the Labour party that these were two major elements the youth of Britain was lacking, and it would be those people that may be relied upon later. ...read more.

This was to ensure those that had lost husbands or parents were looked after properly after the war. This was again another huge example of state intervention. More evidence of the war acting as a locomotive can be seen in the war pensions, which gave injured soldiers' disability benefits. Introduced in 1916, this links back to the Workmen's Compensation Act, but now gave injured soldiers the chance to claim as well. The government saw that health and safety in factories was a large concern, and the government began to employ safety inspectors in 1918. Around this time, cheap factory meals were introduced through internal canteens. The government relied heavily on industry during the First World War to provide everything needed for a war, and so the power of trade unions was increased. They were less threatened as well, as there was no army to break up strikes, as it had been done in Russia in 1917. A huge leap forward for the Trade Unions was the Defence of the Realm Act, as it promised wage increases, showing the huge power the trade unions had over the government. Some workers, however, seemed to feel they didn't even need the trade unions backing to help them bargain during strikes at this point. In Clydeside, there were many unofficial strikes. Workers knew how heavily the government was relying on them during the war, and in 1915 a group of workers took advantage of this fact by striking for higher pay without the backing of their union. ...read more.

He says that some of the reforms and policies were abolished after the war, a prime example of this being that not even half of the 500 000 homes promised for the "heroes" were ever to be built, and another being that the government failed to raise school leaving age to 15, as it failed to supply the funds needed. Also the nationalised businesses were less tightly controlled after the war. When their was the "bust" in 1921 after the "boom" of 1919, the number of union strikes declined incredibly, and it was also in this year that the Triple Alliance split, showing a loss of the trade unions power. This was because of high unemployment; the railway men and transport workers did not want to support the miners strike for fear of their jobs being given to the unemployed. Despite the few reversals on policies, and the small loss of power by trade unions after the war, I still agree with Clive Emsley's view that the war was a locomotive for domestic change, as it influenced so many new reforms and policies, and made the trade unions more powerful than ever before, and completely changed the governments laissez faire approach. The First World War acted as a catalyst to speed up the growth of the unions, and several welfare reforms that helped the working class, and in this sense I do believe it acted as a locomotive for domestic change. Ciaran Sainty History Coursework 1489 words ...read more.