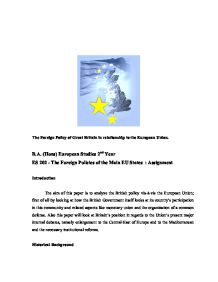 The Foreign Policy of Great Britain in relationship to the European Union.

The Foreign Policy of Great Britain in relationship to the European Union. B.A. (Hons) European Studies 2nd Year ES 202 - The Foreign Policies of the Main EU States : Assignment Introduction The aim of this paper is to analyze the British policy vis-�-vis the European Union; first of all by looking at how the British Government itself looks at its country's participation in this community and related aspects like monetary union and the organization of a common defense. Also this paper will look at Britain's position in regards to the Union's present major internal debates, namely enlargement to the Central-East of Europe and to the Mediterranean and the necessary institutional reforms. Historical Background Before looking at the present position it is important to keep in mind the historical background. The British Government today, led by Tony Blair's Labour Party explains to the British citizens that their country without Europe will be weak. Yet the same party, fifty-five years ago was completely opposed to British participation. The first elections after World War II were, perhaps surprisingly, not won by the pro-Europeanist and British leader during the War, Winston Churchill, but by the Labour Party led by Clement Attlee, which obtained a 146-seat majority in a seat of 640 deputies. There were several reasons that alienated the British Government away from the plans for some sort of European integration. First of all, Britain still possessed a whole Empire and thus entrance in another Community could have been anomalous. Secondly, in the first fifteen years after the War Britain committed itself in many worldwide commitments of anti-Communist Defense pacts, like the Treaty of Brussels (WEU), NATO, SEATO, the Baghdad Pact and CENTO. Thirdly there were the special relations between the United Kingdom and the United States of America. The US had fought two world wars on Britain's side. Also, GB's economic survival in the early post-war years was dependent on American funds, the Marshall Aid being a typical example.1 This situation was to persist until the Sixties, when Britain finally came to apply for membership. ...read more.

This would allow countries too, to define clearly what is then done at a regional level. This Statement of Principles would be a political, not a legal document. It could therefore be much simpler and more accessible to Europe's citizens.10 An important British proposal is that the time has now come to involve representatives of national parliaments more on such matters, by creating a second chamber of the European Parliament. This was proposed in Blair's speech in Warsaw and explained during the IGC. However this proposal does not seem to have been taken seriously by the other members. A second chamber's most important function would be to review the EU's work, in the light of this agreed Statement of Principles. It would not get involved in the day-to-day negotiation of legislation - that is properly the role of the existing European Parliament. Rather, its task would be to help implement the agreed statement of principles; Britain believes that in that way power is devolved downwards. This would be political review by a body of democratically elected politicians. Such a second chamber could also help provide democratic oversight at a European level of the common foreign and security policy. 11 Efficient decision making, even with these changes, will be harder in an enlarged European Union. The British pre-Nice position was that a Commission of up to 30 members will be workable. However at Nice it accepted that up to 2005 the current Commission is unchanged except for one for every applicant country let in; then from 2006 one Commissioner per country up to a maximum of 27 from its present 20.12 Another review would then have to take place in 2010, where a reduction of the Commission's number seems to have to take place. Reweighting votes in the Council had also become a democratic imperative. The agreement reached in the Nice summit increases the weight of Britain's vote. ...read more.

The Conservative call for a renegotiation of the EU's governing treaties has been branded as code for a total withdrawal from the EU. The Referendum Party led by the late Sir James Goldsmith fell apart when the billionaire financier Euro-MP died in 1998. As for the UK Independence Party, which astonishingly won three seats in the June European elections, have held a vote of no-confidence in their leader.27 Yet presently the Conservative Party's 'Save the Pound' movement is gaining quite some backing especially from people arguing against the Euro simply on traditional arguments only. The British Government has promised a referendum regarding monetary union but it is highly probable that it will instruct the citizens to vote in favour of accession in the Euro zone. Europe Minister Keith Vaz recently said 'There are obvious potential advantages in a successful single currency. That's why we are in favour, in principle, of joining a successful single currency - but clear that if we are to do so, the five economic tests set out by the Chancellor must first be met'.28 The tests are these: * whether the UK has achieved sustainable convergence with the Euro-zone economies; * whether there is sufficient flexibility to cope with economic change; * whether joining would create better conditions for business to make long term decisions to invest in the UK; * the impact membership would have on our financial services industry; and * ultimately whether joining would be good for employment. With fresh elections coming next Spring in Britain it is likely that the referendum will be held following the elections in case of a Labour victory. Conclusion Britain's role, participation and even presence is the EU is something very uncertain. A change in Government could lead to a complete change of perspective. The British Empire is still in the minds of some British: that thought is completely out of line with the Europeanists' dreams. Thus a new analysis of British foreign policy regarding the EU following the next elections could easily be quite different.... ...read more.