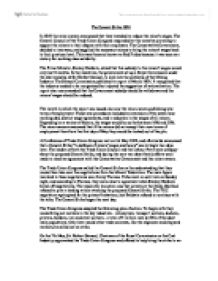 The General Strike 1926 In 1925 the mine-owners announced that they intended to reduce the miner's wages. The General Council of the Trade Union Congress responded to this news by promising to support the miners in their dispute with their employers. The Conservative Government, decided to intervene, and supplied the necessary money to bring the miners' wages back to their previous level. This event became known as Red Friday because it was seen as a victory for working class solidarity. The Prime Minister, Stanley Baldwin, stated that this subsidy to the miners' wages would only last 9 months. In the meantime, the government set up a Royal Commission under the chairmanship of Sir Herbert Samuel, to look into the problems of the Mining Industry. The Samuel Commission published its report in March 1926. It recognized that the industry needed to be reorganised but rejected the suggestion of nationalization. The report also recommended that the Government subsidy should be withdrawn and the miners' wages should be reduced. ...read more.

Talks went on until late on Sunday night, and according to Thomas, they were close to agreement when Stanley Baldwin broke off negotiations. The reason for his action was that printers at the Daily Mail had refused to print a leading article attacking the proposed General Strike. The TUC negotiators apologized for the printers' behaviour, but Baldwin refused to continue with the talks. The General Strike began the next day. The Trade Union Congress adopted the following plan of action. To begin with they would bring out workers in the key industries - railwaymen, transport workers, dockers, printers, builders, iron and steel workers - a total of 3 million men (a fifth of the adult male population). Only later would other trade unionists, like the engineers and shipyard workers, be called out on strike. On the 7th May, Sir Herbert Samuel, Chairman of the Royal Commission on the Coal Industry, approached the Trade Union Congress and offered to help bring the strike to an end. ...read more.

On 21st June 1926, the British Government introduced a Bill into the House of Commons that suspended the miners' Seven Hours Act for five years - thus permitting a return to an 8 hour day for miners. In July the mine-owners announced new terms of employment for miners based on the 8 hour day. The miners were furious about what had happened although the General Strike was over, the miners' strike continued. For several months the miners held out, but by October 1926 hardship forced men to begin to drift back to the mines. By the end of November most miners had reported back to work. However, many were victimized and remained unemployed for many years. Those that were employed were forced to accept longer hours, lower wages and district agreement. In 1927 the British Government passed the Trade Disputes and Trade Union Act. This act made all sympathetic strikes illegal, ensured the trade union members had to voluntarily 'contract in' to pay the political levy, forbade Civil Service unions to affiliate to the TUC, and made mass picketing illegal. ...read more.