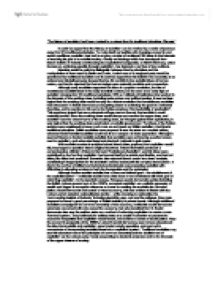 'The history of socialism had been marked by a retreat from its traditional principles. Discuss.'

'The history of socialism had been marked by a retreat from its traditional principles. Discuss.' It could be argued that the history of socialism can be marked by a series of journeys away from it's traditional principles. To make itself compatible with changing economic and social conditions, socialism has had to employ a series of revisions if it's ideas in the interests of reaching its goal of a socialist society. Clearly an ideology which has developed from Marx's beliefs of violently overthrowing the exploitative bourgeoisie, to Blair's third way, which focuses on achieving equality through capitalism, has featured a number of key revisions. Marxists would be quick to distinguish between Marx's principles and the manipulation of them used by Stalin and Lenin. Lenin's use of a vanguard party would be questioned by traditional socialists and it could be argued that his belief in the necessity of an ordered and disciplined party showed that he did not faith in the socialist ideas of human nature, and that he rejected that human beings were naturally sociable and co-operative. ...read more.

The ideas of the Fabian society were considered to have much more on an impact on British socialism, that Marx's traditional principles. British socialists were prepared to see the state as a neutral arbiter, whereas fundamentalist socialists would see it as a weapon of class oppression. Although it seemed bizarre to fundamentalist socialists that socialists were embracing a parliamentary road to socialism, and advocated legal and electoral methods to gain power. With socialist academia sceptical about Marx's false prophecy that capitalism would fall, they began to question Marx's original doctrines. Eduard Bernstein produced a comprehensive criticism of Marx in his book 'Evolutionary Socialism', and his ideas were underlined by the fact that capitalism had proved itself to be stable and flexible, and had not fallen, like Marx had predicted. Bernstein also rejected Marx's crude 'two class' analysis, considering it inappropriate for the twentieth century society with its complex class system. ...read more.

Social democrats also saw the welfare state as a method of reforming capitalism to create a more 'humane' system. They believed the welfare state as a useful mechanism to prevent the economic inequalities that capitalism would breed, and achieve a sense of social justice. After the economic prosperity of the 1960's, Labour's social democracy seen to have abandoned the idea that socialist and capitalism were fundamentally opposites, and seemed to concentrate of incorporating socialist ideas into a capitalism system. Traditional socialists may see this abandonment of the principles of common ownership and the abolishment of capitalism as the Labour party merely responding to electoral pressures and to the interests of the upper classes of society. In conclusion, the revisionary thinkers in socialism are united in their quest for social justice, but after seeing their predecessors attempts at achieving a commonly owned economy, and because of the influence of the rapidly changing economy, socialists have had to engineer their methods of reaching this goal to achieve success. ...read more.

4 Stars - A strong essay that demonstrates a secure, high level understanding of the key issues surrounding the development of socialism in the 20th Century. The core argument is sophisticated and intelligently expressed.
Where the essay could be improved is in overall structure and technique - the introduction does not adequately set out the argument and the conclusion does not decisively answer the question - in fact the question in general is only addressed implicitly.