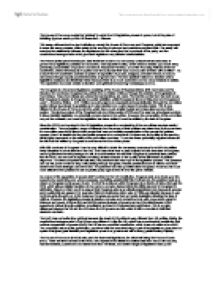 The House of Commons avoids the

The House of Commons avoids the "gridlock" to which the US legislative process is prone, but at the price of inhibiting rigorous scrutiny of the UK executive' - Discuss This essay will examine how two institutions, namely the House of Commons and Congress, which are supposed to serve the same process, differ widely in the way they implement and scrutinise proposed bills. The essay will examine the relationship between the legislature and the executive; the importance of the party; and the constitutional arrangements which give each legislature very different characteristics. The French philosopher Montesquieu said that there could be no democracy unless the three branches of government, legislature, judiciary and executive, were separate bodies, which acted as checks upon each other; preventing concentration of power in one branch. Alexander Hamilton, one of the Founding Fathers of the US constitution, shared Montesquieu's opinion and famously said that "[we] must counter ambition with ambition" . As a result the US constitution contains a system of separation of powers, designed, at least in theory, to ensure democracy through equally powerful branches of government. The term 'gridlock' refers to a situation where legislative decisions are effectively halted because there is so much contention and too many interests to satisfy. ...read more.

The SoP is continued within Congress via a division of labour through the CCS, which allows detailed decisions to be made on complex topics, before the bill is returned to Congress for ratification. Based on this it could be argued that Congress acts as an effective legislative body because it ensures good quality bills are passed. For example, Clinton's healthcare reform plan of 1995 was rejected because it was not thoroughly thought out. In this instance, Congress prevented bad and costly legislation affecting the lives of millions. However, the legislative process is clearly a complex and contentious one, with many actors vying for influence and power. At times this can limit the responsiveness of government and the effectiveness of the executive to deliver its policy platform (manifesto), and lead to Congress being gridlocked. This is a major difference between the UK and the US, since the UK government are voted in with a mandate to fulfil their electoral manifesto. The HoC does not suffer from gridlock because the heart of UK politics is very different from US politics. Firstly, the constitutional arrangements in the UK are very different. Unlike the US, which has an entrenched constitution that outlines a separation of powers (SoP), the UK has an uncodified constitution, which does not outline a true SoP. ...read more.

But, the US Congress can appear unresponsiveness at times because of the level of scrutiny. The flexibility of the UK legislative process, combined with the 'organic' nature of the constitution, empowers the government with the ability to make decisive policy choices that can have an immediate effect on the general public. For example, post 9/11 the government was able to pass anti-terrorist legislation very quickly. Other notable examples include the devolution of power to Scotland and Wales. Such fundamental institutional changes would have been much harder to achieve in the US, because so many interests would have to be considered. In conclusion, it can be seen that both institutions have positive and negative aspects with their approaches to the legislative function of government. However, it is unfair to say that the HoC is any less effective at scrutinising the government than the Congress. The real answer is that both institutions place an emphasis on different areas of the legislative process; the Congress placing much emphasis on scrutiny; whilst the HoC places more emphasis on effective delivery of policy. The result is two institutions which go a long way to ensuring democracy, but will only ever be truly effective at all aspects of the legislative process if they synthesise their good qualities together. ...read more.