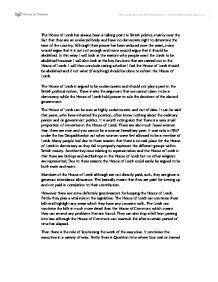 The House of Lords, is their need for futher reform?

Due to these reasons the House of Lords could easily be argued to be both sexist and racist. Members of the House of Lords although are not directly paid, such, they are given a generous attendance allowance. This basically means that they are paid for turning up and not paid in correlation to their contribution. However there are some definitely good reasons for keeping the House of Lords. Firstly they play a vital role in the legislative. The House of Lords can scrutinise these bills and highlight any areas which they have any concerns with. The Lords can scrutinise the bills in much more detail than the House of Commons which means they can amend any problems that are found. They can also stop a bill from passing into law although the House of Commons can overrule this after a certain period of time has elapsed. Then there is the role of Scrutinising the work of the executive. ...read more.

Another reason to put forward to continue to with the House of Lords is simply to share the burden of the government more evenly. Parliament has an enormous deal of work to do, and the House of Lords currently does its fair share of it. However, the benefit of sharing the work must be balanced against the costs, particularly when conflicts between the chambers result in an increased workload for both. In this essay I have looked at the Major criticism of the House of Lords as well as the key function that are carried out by the Lords. I feel that there are some major issues relating to how democratic the Lords are and the lack of minority groups that are a part of the Lords. However I do feel that the Lords do have an essential role to play in British politics and I feel that it should not be abolished. I feel that there should be new elected peers who would be elected using proportional distribution to give a better representation in minority groups within the Lords. ...read more.