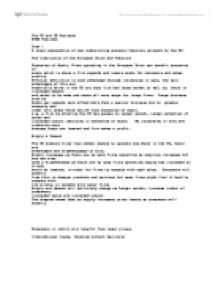 The Institution of the European Union and Theories.

The EU and UK Business AVCE Business Task 1 A clear explanation of key underpinning economic theories relevant to the EU. The Institution of the European Union and Theories Economies of Scale, Firms operating in the European Union can benefit economies of scale which is where a firm expands and lowers costs for consumers and makes profits. Official definition is cost advantage through increasing in sale, the main advantages of this are especially being in the EU are that firm has large market to sell to, there is increased demand and sales to be made and above all more scope for large firms. Large business such as Boots can compete more effectively than a smaller business due to greater monopoly and lower unit costs which derive from economies of scale. e.g. a firm by entering the EU has access to larger market, larger potential of sales and increased output resulting in economies of scale. By increasing in size and producing more average costs are lowered and firm makes a profit. Supply & Demand The EU enables firms from member states to operate any where in the EU, there are advantages and disadvantages of this, Supply increases as there are so many firms operating so supplies increases but one can also have a disadvantage as there are so many firms operating supply has increased so prices would be lowered, in-order for firms to compete with each other. Consumers will benefit from this is cheaper products and services but some firms might find it hard to compete with low prices, or compete with major firms. Supply and demand will definitely change as Larger market, increase number of consumers, increased sales and increased output. The diagram shows that as supply increases price lowers so consumers will benefit. Consumers in return will benefit from lower prices. International trade, (trading without barriers) Free trade, the single European market benefits a firm and the economy of each member state, and the removal of trade barriers leads to reduction in business costs as well as in increasing competition and stimulating consumers and encouraging the creation of jobs and wealth. ...read more.

The main aim of the EMS was to introduce a single currency, this consisted of the Ecu- an artificial currency unit- and the exchange rate mechanism, which tied the European exchange rates together. Stage 1 of the EMS *Free movement of capital *Narrowing of ERM band *Closer co-operation between central banks *Closer co-ordination of economic policies STAGE 2 *Convergence of member states ' economic and monetary policies *Establishment of European Central Bank *Independence of national banks *Participating countries fix their exchange rates The main aim: Joining the euro could enhance both growth and employment prospects, and create an attractive area with low inflation and stability, which would increase the level of investment and create more opportunities. The EMS makes the single market more competitive as fewer restrictions and a single currency. Stage 3 *Introduction of single currency as an electronic currency *Launch of euro notes and coins 12 out of 15 countries adopted the Euro currency and gained many benefits as of this such as: Advantages *Lower costs for management of money- no currency conversation costs, will benefit firms as costs reduced *Fast transactions- no delays in arranging currency conversations *No exchange rate fluctuations, as single currency, therefore greater certainty. No need for business to use safe margins in import and exports. *Transparency of costing- easier for business to secure supplies which reduces costs. Disadvantages *Cost of conversation, new software may be needed to handle this, i.e. computers need to be updated Loading cash machines with new currency *The understanding of the new currency Effects/ the impacts of the Monetary policy Before a country could join the single currency it must meet five tests, UK has the ability to join the euro but has not joined as a results UK firms are at a disadvantage because currently most of the UK trade is with Europe and since UK has not adopted the euro its firms are at a loss. ...read more.

Boots spends large amounts of money finding out what the consumers in each country want and how they could be satisfied. B Recommendations on product features which should be common across the cultural groups. Boots tries to standardise its products as much as possible and not to cause conflict between consumers needs. Boots is considering standardising all its products so they meet all country laws and in the single market most of the countries have a single health and safety regulation. All ingredients used in the cosmetics products are subject to stringent European regulations guaranteeing consumer protection and the well being of the industry employees. Under the cosmetics directive, cosmetics products are required not cause any harm to human health. A safety assessment is carried out taking into the account all the ingredients used in the products. Products safety continues to be primary consideration of the cosmetics industry especially to Boots as figures show that 1 unit in every million produced results in allegations over its safety. Most of these problems are minor but Boots takes every problem and monitors the safety and consumer protection levels. By doing so Boots will be able to reduce the cost of waste, costs of testing on product safety as all EU countries would soon follow one safety scheme. If all the countries followed the same safety regulations Boots would incur less cots but no all countries have the same laws. Some safety laws are the same across the EU member states, one of this is products safety meaning the product should be safe enough for consumer use. This law is being introduced by the EU so firms have less costs and not to change product for each country, safety rules are being standardised across the EU. As a result firms will be saving huge amounts as less costs to meet each countries safety standards. C Justifications and recommendations By operating in the single market Boots has now have the ability to a to sell to over 360 million consumers. ...read more.