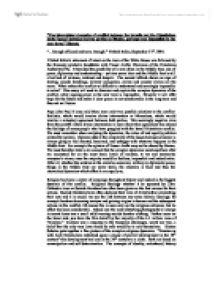 &quot;The interrelated dynamics of conflict between the Israelis and the Palestinians make 'peace' between the two parties an illusion, perhaps even impossible in the near term.&quot; Discuss.

"The interrelated dynamics of conflict between the Israelis and the Palestinians make 'peace' between the two parties an illusion, perhaps even impossible in the near term." Discuss. "...Enough of blood and tears. Enough." Yitzhak Rabin, September 13th, 1993. Yitzhak Rabin's statement of intent on the lawn of the White House was followed by the famously symbolic handshake with Yasser Arafat, Chairman of the Palastinian Authority (PA). It heralded the possibility of a new dawn in the Middle East, one of peace, diplomacy and understanding - yet nine years later and the Middle East is still a hot bed of violence, mistrust and despair. The second infitada shows no sign of abating, suicide bombings, military occupation, claims and counter claims are the norm. What makes this conflict so difficult to understand and seemingly impossible to solve? This essay will seek to discover and explain the complex dynamics of the conflict, while arguing peace in the near term is impossible. However it will offer hope for the future and make it clear peace is not unachievable in the long term and thus not an illusion. Pope John Paul II once said there were only two possible solutions to the conflict: Realistic, which would involve divine intervention or Miraculous, which would involve a voluntary agreement between both parties. This seemingly negative view from the pontiff, where divine intervention is more likely than agreement has echoed the feelings of many people who have grappled with the Israeli-Palestinian conflict. ...read more.

Jimmy Carter once said, "The simple truth is that one of the most cherished, complicated, frustrating, challenging and least understood of our nation's relationships is with Israel." The US interest in the Middle East, can at best be described as patchy. They are undoubtedly the only true outside influence that could change the path of the Israelis and the Palestinians and it is for this reason their interest in the area and its effects must not be discounted from the complex interrelating dynamics of the conflict. The US interest spreads from a few core aims - to curb Arab radicalism and preserve democratic government, now even more important post September 11th; to maintain the openness of the gateway Israel provides to two thirds of the world's oil supplies and finally ideological commitment to the Zionist Project. The US government and population admire both the Israeli pioneering spirit and their use of democracy in a generally undemocratic region. Equally the Jewish vote in the USA commands respect enforced by the American Israel Public Affairs Committee (AIPAC), one of the most powerful and well-organised lobby organisations in the USA. The Jewish Lobby simply cannot be ignored. This complex relationship is maintained with Israeli loyalty being replicated and accompanied with a yearly grant of 3 billion dollars from the USA. Put simply, in the Israeli-Palestinian conflict, if the Americans are not listened to, it is likely know one else will be. ...read more.

Yitzhak Rabin's hopes back in 1993 have not been extinguished and must not be allowed to. The Israeli - Palestinian conflict has clearly waged for too long, too many have suffered. We have seen the complex interrelating dynamics of easily the most vicious circle of violence in the world today. These dynamics have shown us that if there is ever to be peace many things will have to fall in to line, each side will have to give that little bit more leeway and there needs at the root of all this cultural understanding a belief in a global community. The USA and the UN are the two outside players with the greatest ability and potential to help and they must not betray this responsibility, if they do, peace will be unattainable. The current tensions set against the possibility of war against Iraq, the war on terrorism and Yasser Arafat's lack of US support, means peace in the near term, however long that is defined, is sadly impossible. But it is not a long-term illusion. On the lawn of the White House something special did happen which still has not been lost. The ability of man to forgive, understand and change. International relations has too often been the study of conflicts, we can only hope in the next 20 years it can be the study of attaining seemingly unattainable peace. ...read more.