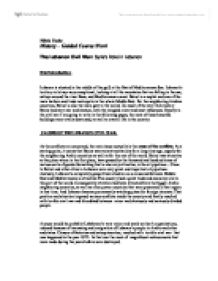 Nikola Uzelac History - Guided Course Work The Lebanon Civil War: Syria's Role in Lebanon Brief introduction: Lebanon is situated in the middle of the gulf, at the East of Mediterranean Sea. Lebanon's territory is let say very exceptional, looking at all the mountains that are falling in the sea, valleys around the river Beca, and Mediterranean coast. Beirut is a capital and one of the main harbors and trade metropolis in the whole Middle East. For the neighboring Arabian countries, Beirut is also the main gate to the world. As result of the very ritch history Beirut had very rear architecture, with the mingled orient and west influences. Exactly in the civil war I am going to write in the following pages, the most of these beautiful buildings were totally destroyed, as well as overall life in the country. CAUSES OF THE LEBANON CIVIL WAR: As the conflicts are concerned, the main issue acctually is the cause of the conflicts. As a starting point, it seems that Beirut was very attractive city for a long time ago, equally for the neighboring Arabic countries as well as for the rest of the world. Beirut was attractive as the place where in the first place, have passed by the thousand and hundred tones of various sorts of goods. Something that is also very attractive, is the oil pipelines .. Close to Beirut and other cities in Lebanon were very great and important oil pipelines. Acctualy, Lebanon's completely geopolitical situation as a crossroad between Middle East and Mediterranean is attractive.This country had a great trade and economy role in this part of the world. Consequently attention had been attracted from the bigger Arabic neighboring countries, as well as other power countries that were presented in that region in that time. And Lebanon became permanently watching place for foreign interests. That position and situation imposed various conflicts inside the country and finally resulted with terrible civil war and bloodshed between minor and obviously and seriously divided people. ...read more.

And than Syrian influence on Lebanese political decision has increased over time. The extend of Syrian occupation in Lebanon was characterized by rigid values that Syria adopted from the beginning of the Lebanese civil war in 1975, and which continue. Three factors helped the Syrian government achieve its goals: the historic and geopolitical ties between Syria and Lebanon, the Arab and Islamic balance of power, and Syria's diplomatic skills in taking advantage of regional and international conflicts. The situation changed dramatically and Syria has occupied Lebanon since 1976, and has been defining the course of domestic and foreign policies in Lebanon ever since. Syrian diplomatic involvement grew during 1976, but it had little success in restoring order in the first half of the year. Continuing its search for a domestic political settlement to the war, elected Ilyas Sarkis came to take over as president when Franjiyah's term expired. Sarkis had strong backing from Syria and as consequence was unacceptable to Jumblatt, who was known to be antipathetic to Syrian president Hafiz al Assad and who insisted on military solution. As Lebanese Front declined two outcomes appeared: the establishment an independent Christian state as possible second Israel and if the Lebanese National movement won the war the creation of radical state on Syria's western border. To Assad neither of these possibilities was acceptable. To prevent all next occurrences in 1976 Syria intervened military against the Lebanese National movement, hoping to end fighting very soon. But Syrian forces suffered a lot and even more provoked outrage from many of the Arab states. And because of these military and diplomatic failures Syria decided to the resistance, and chose to participate in an Arab peace conference held in Riyadh, 1976. As Sarkis concerned he in 1976 appointed as Prime Minister Salim al Huss, who chose a cabinet of technocrats that was authorized to rule by decree for six months. ...read more.

In the past Palestine was part of the Ottoman Empire, and after Palestine came under British control. After the war in 1948-49 Palestine was divided among Israel, Jordan and Syria and Palestine's residents became refugees. However, situations in Lebanon have been followed with unbalanced, full of uncertainty and an unpredictable outcome about the new occurs. Conclusions We can conclude that the Lebanon and Middle East is not failed region. No one who compares the Middle East of today with the Middle East of 1970s and 1980s would suggest that there has been no progress, or that it regress back to the past. The Middle East is just not successful region by the standards of the most advanced developing regions and countries. The problem is that the Lebanon and the Middle East are moving too slowly. It is very hard to speak about economical reforms and much harder to implement them. Further, the population growth. Most countries in the world cannot be able to afford such high rate of growth. The Lebanon and all the Middle East need aggressive efforts to limit population growth and bring it in balance with its rate of economic development. Also, misunderstandings between nations, their religion and political orientation, who couldn't find minor sense for mutual interests and common life. Finally the peoples of Lebanon and the Middle East deserve action, not promises and words. They deserve competition not domination. They deserve better education, creativity and growth. And life without missiles wars, without enemies. I hope that entire world have reached the age where dialogue is the only way to run the world. In closing, although I do feel the world will be different, I do not see drastic changes ahead. Probably bringing people closer together and making countries and peoples interdependent, is what will contribute to peace. Literature Used: * Dr. Branislav Sinadinoski - "Lebanon's crossroads in past and today" or("Libanskite krstopati nekogas i denes") * P.Mangoski - "International Relations" or ("Medjunarodni odnosi"). * Google (Internet). * Aleksandar Hristov - "Middle East" or ("Sredni Istok"). ...read more.