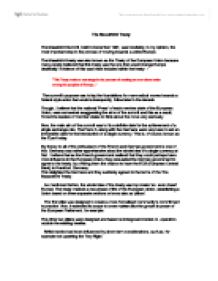 The Maastricht Treaty The Maastricht Summit, held in December 1991, was inevitably, in my opinion, the most important step in the process of moving towards a united Europe. The Maastricht treaty was also known as the Treaty of the European Union because many people believed that this treaty was the one that would change Europe drastically. Evidence of this was infact included within the treaty:- "This Treaty marks a new stage in the process of creating an ever closer union among the peoples of Europe..." The summit's purpose was to lay the foundations for more radical moves towards a federal style union that would subsequently, follow later in the decade. ...read more.

This is, of course, known as the 'Euro' today. My theory to all of the enthusiasm of the French and German government is one of this. Germany was rather apprehensive about the whole idea of a single currency at first. I believe that as the French government realised that they could perhaps have more influence in the European Union, they persuaded the German government to agree to the treaty, by offering them the chance to have the ECB (European Central Bank) in Frankfurt, Germany. This delighted the Germans and they suddenly agreed to the terms of the The Massstricht Treaty. As mentioned before, the whole idea of the treaty was top create 'an even closer' Europe. ...read more.

Majority voting, on key issues of foreign policy had not been approved, so that Britain still had the right to act alone if it wished. This, had dropped the federal style Europe, so that the Conservative party could be sure that they were no longer on an irreversible path to a federal future which, would change the way in which we live today, drastically. This, however, did not help the whole situation at all. The whole situation infact didn't help the Tory-right as the Tory party disagreed with the main terms of the treaty. This, subsequently caused high tention throughout Europe, particularly Germany, the so-called 'Leader of Europe'. As a result to the scepticism created by opposing parties, the government of France vetoed the entry for the UK ...read more.