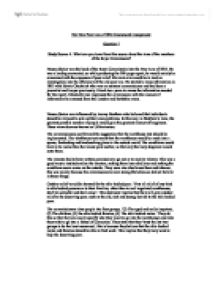 The New Poor Law of 1834 Coursework Assignment - source based

The New Poor Law of 1834 Coursework Assignment Question 1 Study Source A. What can you learn from this source about the aims of the members of the Royal Commission? Nassau Senior was the head of the Royal Commission into the Poor Law of 1834. He was a leading economist, so while producing the 300-page report; he would mainly be concerned with the expenses of poor relief. His main aim would be to lead an investigation into the efficiency of the old poor law. He started to mass information in 1832 with Edwin Chadwick who was an assistant commissioner and had been a journalist and lawyer previously. ...read more.

The workhouse test meant that the workhouse would be made into a sparse, foreboding and hardworking place to the outside world. The conditions would have to be worse than the lowest paid worker, so that only the truly desperate would enter them. The inmates had to have written permission to go out or to receive visitors. This was a good way to institutionalise the inmates, making them less rebellious and making the conditions seem worse on the outside. They were also disallowed beer and tobacco, this was mainly because the commissioners were strong Christians so did not believe in these things. Outdoor relief would be banned for the able-bodied poor. ...read more.

They state that they 'trust the last two groups to be the least numerous', this is because they believe that the able-bodied males and females should be able to find work. This implies that they truly want to help the deserving poor. The commission also states that the different groups should be 'kept in separate buildings rather than under the same roof'. This is to increase the undesirability of entering the workhouse because the families would be separated if they entered it. This also could be construed that they will place the able-bodied poor and the deserving poor into separate institutions. They did in fact place the able-bodied poor into Houses of Correction, because they believed them to be idle. ...read more.