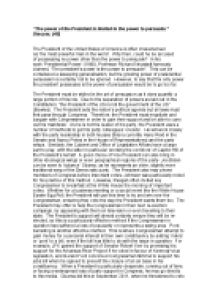 The power of the President is limited to the power to persuade. Discuss.

﻿?The power of the President is limited to the power to persuade.? Discuss. [45] The President of the United States of America is often characterised as ?the most powerful man in the world?. Why then, could he be accused of possessing no power other than the power to persuade? In his work ?Presidential Power? (1960), Professor Richard Neustadt famously claimed, ?The president?s power is the power to persuade?. This can be considered a sweeping generalisation, but the growing power of presidential persuasion is certainly not to be ignored. However, to say that the only power the president possesses is the power of persuasion would be to go too far. The President must be skilled in the art of persuasion as it does quantify a large portion of his role. Due to the separation of powers as laid out in the Constitution, ?the President of the US is not the government of the US? (Bowles). The President sets the nation?s political agenda but all laws must first pass through Congress. Therefore, the President must negotiate and bargain with Congressmen in order to gain their support and be able to carry out his manifesto. As he is not the leader of his party, the President uses a number of methods to get his party colleagues ?on-side?. ...read more.

and pardon criminals. He is also Commander-in-Chief of the armed forces (an extremely powerful role), and the United States? chief negotiator and diplomat. This means he has significant power in regards to foreign policy, and can deploy troops without consulting Congress. The President also, arguably, possesses so-called ?inherent powers?, i.e.: those powers afforded to the President which are not specifically called for in the Constitution. The greatest success of ?inherent power? has been in foreign policy, where the President has ?special prerogatives? (acknowledged by both Congress and the Supreme Court since 1936). There has been less success domestically. For instance, Nixon was impeached for claiming that withholding the Watergate tapes from the public was permissible due to presidential privilege, and the Supreme Court removed Clinton?s short-lived ?line-item veto? in 1998. Bush had more success, when widespread public and congressional support post-9/11 led to a massive expansion in the domestic powers of the federal government. The President also has the power to appoint justices to the Supreme Court, which is extremely important as the justices have life tenure, and, therefore, can influence the government for years to come. So we can see that the President does have considerable power beyond the power to persuade, but these powers are, for the most part, severely limited. ...read more.

also struggle to win support. For the above reasons, the power to persuade can be seen as being as limited as constitutional powers. Harry Truman famously said, ?I sit here all day trying to persuade people to do things they ought to have the sense to do without my persuading them. That?s all the powers of the president amount to.? I would suggest that this statement is a little exaggerated- perhaps President Truman was simply feeling a little disappointed with the extent of the power his role actually bestowed upon him. The power of persuasion is extremely significant within the role of the President of the United States. After all, it is through this power that he carries out his manifesto. However it is not an unlimited power, being curtailed by circumstance (i.e.: events) and the President?s own particular aptitude for persuasion. The powers the President holds in other areas; particularly his freedom and ?special prerogatives? in foreign policy; and, domestically, the powers of appointment, proposing legislation and veto; can be considered to wield far more weight than the power of persuasion, even despite their limitations. The power to persuade only addresses the President?s power over Congress, and does not consider his power internationally or over the judiciary, military, civil service and general public. For this reason, the power of the President can be seen as far more extensive than simply the power to persuade. ...read more.