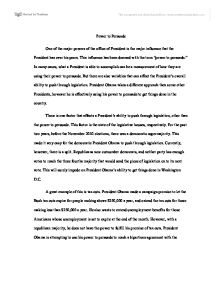 The power to persuade: a term coined by a man named Neudstadt, is the true measure of Presidential success. If a President is able to use this power effectively, it will help him achieve his agenda.

Power to Persuade One of the major powers of the office of President is the major influence that the President has over his peers. This influence has been deemed with the term "power to persuade." In many cases, what a President is able to accomplish can be a measurement of how they are using their power to persuade. But there are also variables that can affect the President's overall ability to push through legislation. President Obama takes a different approach then some other Presidents, however he is effectively using his power to persuade to get things done in the country. There is one factor that affects a President's ability to push through legislation, other than the power to persuade. This factor is the state of the legislative houses, respectively. For the past two years, before the November 2010 elections, there was a democratic supermajority. ...read more.

President Obama is attempting to use his power to persuade to reach a bipartisan agreement with the republicans. In this agreement, Obama will extend the Bush-Tax-Cuts for everyone. He will also renew unemployment benefits. The President is using his power to persuade to come away with a half victory rather than a full defeat. President Obama's first term began in January of 2009. During this time there was a democratic supermajority, which gave the President a huge advantage in pushing through legislation. He began to take this opportunity to push through a health care reform bill, which would essentially give universal health care to America. The President dedicated half of his first term to this project, but in the end came up short. He was no able to pass the health care reform bill. ...read more.

As it is currently going, with the President's arms practically tied and his actions limited, I predict that President Obama will not be re-elected. The power to persuade: a term coined by a man named Neudstadt, is the true measure of Presidential success. If a President is able to use this power effectively, it will help him achieve his agenda and push legislation through. However, if he does not use this power well, it is likely that the President's agenda will not get accomplished. While there are some factors that can limit the potential of a President, the main focal point that makes a President great is that power to persuade. If President Obama can truly use the power to persuade in the remaining time of his first term, he has a great chance of re-election. If he is not able to get things done, then he will be just another one-term President. ...read more.