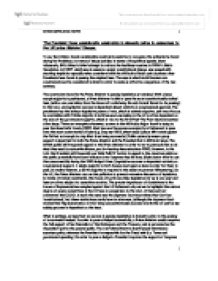 'The President faces considerable constraints in domestic policy in comparison to the UK Prime Minister' Discuss.

'The President faces considerable constraints in domestic policy in comparison to the UK prime Minister' Discuss. To say that Clinton faced considerable constraints would be to recognise the setbacks he faced during his Presidency, in terms of sleaze and also in terms of his political agenda. Most infamously, Bill & Hilary's failed attempt to reform the healthcare system in 1993/4. Blair's 'Devolution Act 1997' -which was in essence a major constitutional change- was passed with startling simplicity especially when considered with the difficulty Clinton and countless other Presidents have faced in passing the simplest laws. The ways in which both Premiers are constrained must be considered in detail in order to make an effective comparison of the two systems. The constraints faced by the Prime Minister in passing legislation are minimal. With a large enough majority in parliament, a Prime Minister is able to pass the most constitutionally radical laws, (with a one-year delay from the House of Lords being the only formal threat to its passing.) In the USA, any legislative success is dependent almost entirely on congressional approval. The presidents has the solitary legislative power of veto, which is entirely negative, and even this can be overridden with 2/3rds majority in both houses. Law making in the UK is often dependent on the size of the government majority, which is -due to the First-Past-The-Post electoral system- often large. ...read more.

The president often also uses his cabinet to reward loyalty and repay political debts to people. The PM must also have a political and social balance the cabinet (e.g. Prescott and Short were the representatives for old labour ideal in Blair's cabinet,) and must pick an able Cabinet as they will have a job that is constantly in the public eye. A PM who does not include a variety of views in their cabinet can become isolated, as was seen towards the end of Thatcher's government in the late 1980s. If the PM has a small Majority then the amount of people a cabinet can be selected from is minimal. Both the President and the Prime Minister require Cabinet appointees to be ambitious and enthusiastic about the job, in the UK a dissident MP such as Dennis Skinner would not do Blair any good by having his in his Cabinet and in the US, congressmen simply do not see the job as cabinet minister to be important or desirable. The PM is more constrained than the President in terms of Cabinet appointees as there are much fewer people to choose from, however the UK and USA cabinets are very different in terms of domestic power and credence and so perhaps it is justified that the more important Cabinet is the harder to fill with incompetent ministers. ...read more.

This was seen as autocratic and so led to legislation being passed to prevent this from happening again. The PM has distinctly more power than the President in that he has a potentially unlimited time in office. This however, has some advantages as it means that a PM never has a 'lame-duck' period. The UK PM is less constrained than the US President in most matters of domestic policy, and it could be argued that the ones he is more constrained in because the issue is not as important in the US (e.g. the President's cabinet has much less authority and is much less accountable than the PM's cabinet and so the PM is justifiably more constrained in who he appoints into it.) Harry Truman said about the limits of presidential power. "I sit here all day trying to persuade people to do the things they ought to have the sense to do without me persuading them to. That's all the powers of the President amount to." The Prime Minister has whips and party discipline in order to keep people working without this degree of persuasion. The President does face considerably more constraints with regards to domestic policy than the Prime Minister, but the USA is also a considerably larger and more ethnically, socially and geographically diverse country to try to represent domestically without sufficient scrutiny and control than the UK. 1 NATHAN GRIFFIN, 13 LER- POLITICS 1 ...read more.