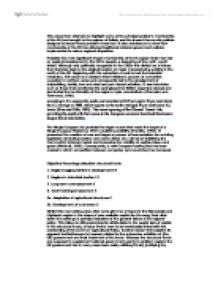 The principal problems membership of the EU has brought to the regions of Britain.

This essay then attempts to highlight some of the principal problems membership of the EU has brought to the regions of Britain and the impact Community policies designed to lessen these problems have had. It also endeavours to show how membership of the EU has affected traditional national government policies implemented to reduce regional disparities. Probably the most significant impact membership of the European Union has had on regional development in the UK is regards a deepening of the north-south divide. Although only politically recognised in the 1980s this divide has a history that stretches back to the original location of major manufacturing activity in the north of the UK. Beginning with the extraction of coal to fuel the industrial revolution, this acted as a catalyst which initiated a process of cumulative causation in northern areas and consequently led to the development of shipbuilding, textile, iron and steel and port-based activities. It was industries such as these that constituted the springboard for British expansion abroad and dominated the functionality of the regions major conurbations (Champion and Townsend, 1990). according to EU sources the south-east recorded a GDP per capita 30 per cent above the EU average in 1988, whilst regions in the north averaged 10 per cent below EU levels (Wise and Gibb, 1993). ...read more.

it is important to realise the extent of the national north-south divide, in both social and structurally economic terms, pre-membership of the European Union, before the damaging effects which inclusion offers the north can be truly appreciated. Immediately upon joining the EC in 1973 the national north-south divide was exacerbated and extended to a European level. Not only was the north distant from the concentrated hub of growth in the south-east of the country it was now geographically peripheral to the core of Europe and its status as such had been compounded. However, it is since the Single European Act of 1986 that the problem of increased peripherality has manifested itself as unequal levels of regional development in the UK. wwag agw esagags ayag agba nag kcag aguk. wwag agw esagag The Single European Act provided the legal muscle that made the target of a Single European Market by 1992 a realistic possibility (Franklin, 1990). It prevented the creation of new and began a process of harmonisation for existing legislation (including taxation and excise duties etc.) aimed at stabilising the Community's internal market and increasing the mobility of capital, labour and goods (Minshull, 1990). Consequently, a new European trading bloc has been created in which competition between companies (and countries) ...read more.

This failure is still predominantly attributable to the woeful lack of capital in the structural funds, a factor that is seen to be inextricably linked with the overfunding of the Common Agricultural Policy. Another reason that explains its apparent ineffectiveness is however related to the subversive activities of (the UK) government and their treatment of the funds. Whereas the structural funds are supposed to supplement national government grants to problem regions the UK government has in many cases been solely utilising EU aid, justifying the decision via reference to the large UK contribution to the CAP and the budgetary deficit it leaves (Financial Times, 1991, Hitiris, 1991, Times, 1991, Marks, 1992, Financial Times, 1993). The conflict between the EU and UK over this matter has been so intense that "Ministers have been warned over [a loss of] �1 billion EC aid" (Financial Times, 1993, p8a) if they do not start conforming to the rules and matching EU allocations. However, although the EU in the SEA (and in practice) have tried to introduce policies/funds to "reduce disparities between the various regions and the backwardness of the least-favoured regions" (SEA cited Franklin, 1990, p70) the conflict that exists between the notions of (interventionist) regional policy and the operation of a neoclassical market place represents a dichotomy that is difficult to resolve and that, consequently, has important implications for the UK and in particular its north. ...read more.